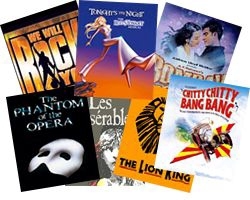 Following yesterday’s report on declining West End theatre ticket sales, and our exhortation to grab tickets while they’re cheap and plentiful, we’re pleased to see that London has immediately stepped up to the plate.

It’s great to see that Londonist has such a positive influence on so many Londoners. Barely hours after posting our report on a rumoured West End slump, it seems that you have wasted no time in buying up tickets for big shows. ‘Theatre-land’ is now blooming! At Londonist Towers, we are quite proud to have single-handedly initiated an immediate reversal of the West End’s downward spiral.

Unfortunately, in a clear indication that no-one actually knows what the hell they’re talking about, some reports are claiming that West End ticket sales have been high for months, and that there has been no recent drop in sales. Of course, these ridiculous claims directly contradict our report from yesterday, and thus are clearly nonsense.

We think you know who to trust. Londonist has saved the West End theatre industry – and that’s all you need to know.