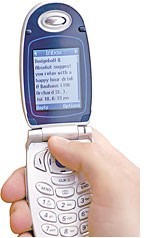 It's only fair that if we run posts imploring you to vote for us in certain online awards then we should also let you know when we lose said awards... so here we go.

A few weeks ago we mentioned that Londonist had been shortlisted for the Yahoo Pick of the Web in the 'Community' category.

We didn't hold out much hope for our chances as we were up against a strangely mixed bag, and one that included such notable digital products as Gumtree and Yahoo's very own Flickr.

The award, which were voted for by a panel of experts, were announced yesterday and as you might have guessed, we didn't win. In fact we lost out to Treasure My text, a site which stores yr txt msgs 4 u.

It's easy to see why the site won. Consider this gem from their front page:

Could you ring Trevor when you get a chance Luv.

Go vote for us now, unless you're the recipient of the message above in which case you should really try and get hold of Trevor.