What To Feed An Invalid 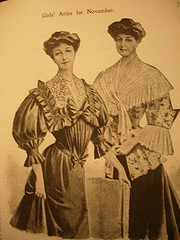 Throughout today Londonist will be reprinting some 'handy hints' we found in a collection of Girls' Own albums from the early 1900s, just to give you a real flavour of what life was like for the girls of London town a century ago.

First up: some tasty treats for the invalid in your life.

A Splendid Tonic. - It is always very difficult to vary an invalid's food, and yet it is most essential that it should be done. We give a few excellent recipes, especially for invalids.

1. Take two calves' feet, and after washing them put them into a large covered jar with two pints of new milk and the same quantity of cold water, a pinch of salt; bake this in the oven for three hours and a half; and flavouring that is liked should be put in with it, such as lemon-peel, cinnamon or mace. When cold remove the fat. A large cupful of this should be given the last thing at night and the first thing in the morning, either hot or cold, and with sugar or salt according to the taste of the invalid.

2. Procure from the butcher's six sheep's trotters. Put these in a saucepan with two blades of mace, a small piece of cinnamon, some lemon-peel, a few hartshorn shavings, and a little isinglass. Cover these with two quarts of water, and gently simmer until it is reduced to one quart. Leave it till it gets cold, and then remove the fat. Warm a good teacupful of this with a little new milk, and give to the invalid twice a day.

3. Egg Wine. - Beat up a new-laid egg and mix a tablespoonful of cold water with it; put into a small saucepan a wineglassful of white wine and half a glassful of water with a little sugar and nutmeg. When it boils pour a little at a time into the egg, stirring all the time the same way till the whole is mixed. Then pour it all back into the saucepan over a slow fire, stir for two minutes, but do not let it boil or it will curdle.