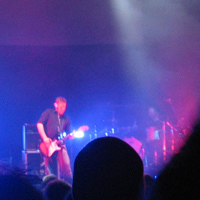 Since we down here in the dungeon are absolutely convinced that your New Year's resolutions are all going to be to see more live music in 2006 we've kindly decided to drop you a list of some of the shows we'd like to see you at (that you can at least still get tickets for):

Anything you think we've forgotten drop us a line or leave a comment for all the folks to see.