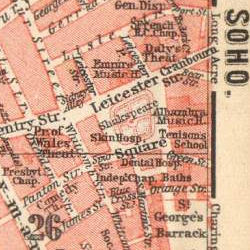 All the leftovers eaten? Recovered from seeing every piece of glass in the Gherkin explode? Relieved that we've been saved from TEN terrorist attacks since 2001? Time to take a breather before all those pesky New Year's resolutions kick in then.

This is that odd time of year, the limbo between Chrimbo and January, the eye of the storm... welcome to the Londonist perineum.

So we didn't want to bog you down with all the bad news or the sappy feel good items that you'll find elsewhere - instead we figured we'd brace ourselves for the coming year with a look backwards. Not to 2005 though. Everyone will be doing that. Instead we thought why not go back a tad farther. So we dusted off the extensive Londonist chronicles from our basement archive and pulled out the best posts from 1905.

Wondered what the best London blog would have been talking about if the idle North had got its act together and developed the Interweb as well as the Spinning Jenny? Well wonder no more as over the next couple of days we bring you the best things to nibble to take your mind off the passing of Good Queen Vic, a rundown of last century statistics, photos and illustrations, the inspiration for Bond, James Bond and book reviews, diary extracts and more besides.

So fire up the flux capacitor and set the dial for one hundred years or so BCC*...

Note: Londonist would be lost on the streets of Edwardian London without a handy Baedeker's Old Guide Book to London and its Environs 1905.