You, our faithful Londonist readers, did so well with the previous installments of this little game, in which we have asked you to identify the London location of videos featuring Kylie, Coldplay, and the Chemical Brothers, that we thought we'd give you a bit more of a challenge. (As always, post answers or other reactions in the comments.)

Madonna, Madonna, Madonna! We don't even need to make a joke. You can come up with your own. And we don't even feeling like being mean to her right now, since her new video, for "Hung Up" the first single off her new album, very clearly imparts an important lesson to the youth of the world about the importance of leaving California and coming to London to dance in a basement, a message Londonist firmly endorses.

So the video opens, and these kids are in the greater Los Angeles area, vexed by the heat of the sun, futilely dancing in front of a bus stop. Clearly, a change of scene is required. So they get in a taxicab, and... SHAZZAM! The taxicab they were in has magically transformed itself into a London Black Cab, and has magically crossed all of North America and the Atlantic Ocean, and they are in London! And they get out of the cab and are all lookin' around acting confused, saying to themselves "Holy shit! We just took a cab from LA to London!"

But where, dear readers, do they alight from the cab?

A brief crane shot might be a bit more revealing:

Then Madge herself (who has, meanwhile, been assiduously practicing her Olivia Newton-John-style dance routine by herself in a dance studio wearing the most hideous leotard in history) (Oh sorry we're being nice to her right now) steps out on the streets of London herself. But where is she strolling?

Then the kids from LA, presumably having spent all of their money on their intercontinental cab ride, are forced to take the tube. We see an establishing shot of a nondescript rail bridge:

And then we see a phenomenon that will be all too familiar to every Londoner: the sassy dance-off on the tube. We've lost count of the times that rival gangs of urban youth on the tube train attempt to top each other with their funky moves, only to be put in their place by an even funkier zaftig woman in sequins. Note that the LED display announcing the next stop has been turned off, and all the ads have been removed. The upholstery and layout clearly identifies this as a Jubbly line train of the 1996 type (notice the "perch seats"), but how did they get the yellow handrails replaced with chrome ones?

This raises interesting questions about where exactly the underground dance-party that they are travelling towards actually is. Could in be in some undiscovered back-alley in Canary Wharf? Or are they headed north, towards some unexpectedly debauched corner of Neasden, perhaps?

Finally they get off the train and walk... somewhere?

The rest of the video is all filthy basements, making out in the corner, shirtless boys flipping themselves upside down, and Dancing Stage Fusion. Basically, our typical Tuesday night out, then...

Update! It has been brought to our attention that there is also a nice City skyline shot at the very beginning of the video, with a prominant Gherkin: 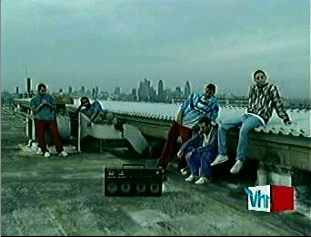 And that this building, on which some parkour happens, is probably in London somewhere. Do you recognise it? Help us out! 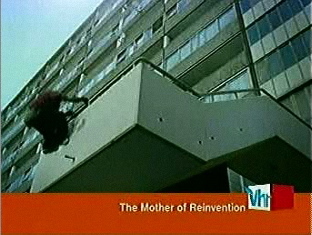 Should the DJs play "Hung Up" during our FABULOUS BIRTHDAY PARTY THIS COMING THURSDAY TO WHICH EVERY SINGLE ONE OF YOU IS INVITED? Let us know in the comments!