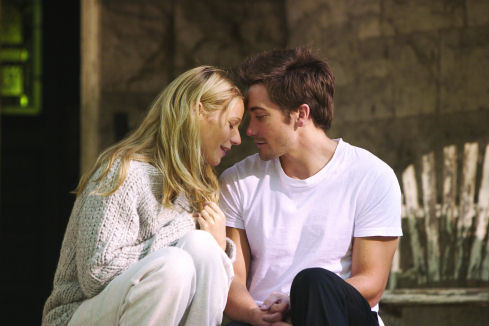 For the longest time we just didn't know what to do with Gwyneth Paltrow so tried our best to ignore her. For a while she was 'the head in a box chick', but then along came The Royal Tenenbaums and we sat up to take notice again... where the hell did that performance come from? After the horrors of Bounce we still worry after her and while that mess was obviously just a plea for help rather than a serious career suicide attempt there's no guarantee she won't become Afleckted again.

More films like Proof are definitely a step in the right direction. Then again she's on solid ground after living the thing in its stage form right here at the Donmar theatre. We don't generally go weak at the knees when American actors tread our boards so we missed the run, but by all accounts it was a hell of a play. We're happy to say that it makes a good solid slice of celluloid too.

The plot is interesting - Gwyneth plays Catherine, still shell shocked from the recent death of her mathematical genius father Anthony Hopkins (in fine form with a fine set of whiskers). One of her father's students (Jake Gyllenhaal) is on hand to provide help in sorting through the man's work, thought to be worthless after his descent into mental illness, and perhaps more. Complications arise when her sister (a staggeringly good Hope Davis) arrives from New York to take charge. Then there's the matter of the titular proof - a discovered equation that could put the world of mathematics on its head that forces Catherine to reassess assumptions not only about her father but herself too. Could she have inherited more than just a knack for mathematics?

The thing feels theatrical in places, but that's no bad thing and Paltrow is very at ease in the skin of Catherine. Hopkins can play this kind of role with his eyes closed and offers a sad dignity to the ailing genius. Gyllenhaal helps us forget the tedium of The Day After Tomorrow being very likable as the the nerd torn between feelings for Catherine and his belief in the proof. Special mention must go to Davis though - her Claire is appallingly insensitive yet does her best to offer stability to her estranged sister. She can be seen elsewhere at the festival in The Matador along with Pierce Brosnan in cowboy boots and tight speedos...

We'll be interested to see what fans of the original play think. There's certainly more scope for detail with flashbacks a plenty and an entire sequence of juxtaposed events leading to a heady climax that would be difficult to achieve live, but perhaps some of the intensity of the stage version is missing.

For those simply desperate for a good solid academic drama after the cloying nonsense of say Good Will Hunting and Finding Forrester ("You're the man now, dog!") this is a real treat.

Note: Although the film was set in Chicago and features some great location shooting the actual house interiors were shot right here in London. In fact they rebuilt the entire house at Elstree.

Previously: Keane, Bubble and They Came Back, Factotum and Dark Horse.