Seven days to go until the London Film Festival opens its doors. Here's another two of the films on offer.

It turned a few heads when it was announced that Bent Hamer (Kitchen Stories) was going to direct the film adaptation of Charles Bukowski's Factotum, but any misgivings can be more or less laid to rest - perhaps because if anyone knows a thing or two about drinking it's the Norwegians. Not that Buk's work is all about the drinking... there are the women and the horses and a never-ending series of dead end jobs to get fired from too. But at its heart Bukowski's writing was all about the writing, which is where the film trips up slightly. After Mickey Rourke's turn as Bukowski's alter ego Henry Chinaski in Barfly it now falls to Matt Dillon to try and capture some of Buk's charm. He almost pulls it off.

This is actually probably Dillon's best role to date - physically he's beefed up some and has the younger version of Bukowski down pretty well. It's just that there's a little something missing.

The film on the whole is an enjoyable dive into Bukowski's world - not sourced from the book 'Factotum' alone and with some of the man's best poetry also used to great effect - it's at its best when Dillon has Lili Taylor to play off against. Her portrayal of fellow bar hound and sometime lover Jan is fantastic. Together they make the sweetest alcoholic couple that you're ever likely to cross the street to avoid. Whether he's offering her his shoes to walk home in or she's taping up his undercarriage after giving him a particularly bad dose of crabs you can't help but warm to them:

Hank: Wait a minute. What are you going to do to my balls?

The film dips a little when Chinaski hooks up with Marisa Tomei's Laura (Tomei doing her best to gain some credibility after a decade of forgettable movies), but gets back on track quickly with Chinaski losing more jobs in a couple of weeks than the entire Londonist staff have held altogether. The scene when he applies for a job on a newspaper as a reporter and is hired as a janitor is priceless, as is his dealing of a fellow punter at the track following a dispute over a seat.

The jobs, the bars, the horses and the women come and go. The only constant thing in Chinaski's life is the writing so it's a shame it's given so little screen time - we do see Dillon scribbling at tables from time to time and he does drop manuscripts into the post outside nearly every bar he wanders into, but his voice over narration comes and goes. Hamer does a great job of evoking life on the skids, but it would have been nice to have more of Bukowski's commentary to put it into context.

Not unmissable but we'll go out on a limb and say it's a more successful film than Barfly. Now if only Dillon will stay on board for a screen version of 'Women' we'll be very happy indeed.

Showing as part of the Films on the Square strand on Wednesday 2 November at 8.30pm and Thursday 3 November at 1.30pm. 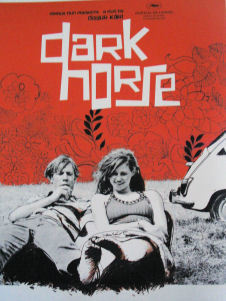 Hands up if you saw Noi The Albino. It didn't get a huge release here, but was a cracking little film (probably find it in Fop for a tenner). Dark Horse is by the same director and is an absolute gem of a find. The dark edge of Noi is discarded with here and we get a straightforward slacker comedy that even made stony faced film critics from the broadsheets laugh out loud. This is a funny film.

It follows Jakob Cedergren's Daniel as he drifts along through life with no plan other than to do his thing and avoid any hassle if at all possible. When we first meet him he's been called into the tax office to try and explain how it is that he's only officially earned seven dollars in the past four years. Daniel is frankly baffled that the tax system exists at all. Minutes later he's pulled over (eventually) by the police for ignoring traffic signs and holds off the bemused cops until the track he's listening to on his beloved headphones finishes.

Daniel's best friend is the 'play it by the rules' Grandpa (that's his nickname) - an overweight yin to Daniel's yang who dreams of becoming a professional football referee (he's hardly seen out of uniform) after getting the highest ever score on the theory test. Their friendship is constantly strained by the fact that Grandpa receives very little for conforming while he sees everything that Daniel needs fall into his lap with no effort. Things come to a head when they fall for the same girl working at the local bakery - Tilly ScottPedersen's Franc - off her head on magic mushrooms.

Daniel does have a job - sort of - he gets paid cash for stenciling graffiti around the city on the behalf of lovesick couples (kind of like Banksy doing requests) leaving him plenty of time to pursue Franc and avoid her man-hungry mother (don't mention the grandmother... we were crying with laughter).

The film loses a little steam when it introduces a new character quite late into the running time to act as another counterpoint to Daniel's lifestyle and frankly it's unnecessary and distracts from the joy of watching the characters we've already invested in interact and eventually crash headlong into responsibility. Just when you think the film can't possibly get any better director Dagur Kari throws in the one single colour frame in the entire movie and floors you.

Go see it and with a little luck it'll get a bigger release than Noi later in the year.

Tomorrow we'll bring you the low down on Gwyneth Paltrow, Anthony Hopkins and Jake Gyllenhaal in stage to screen adaptation Proof.

Previously: Keane, Bubble and They Came Back.