LFF Preview: BUBBLE and THEY CAME BACK

By sizemore Last edited 172 months ago
sizemore LFF Preview: BUBBLE and THEY CAME BACK

Bubble opens with fresh ground being broken, but it's only when the camera pulls back that you realise it's a grave that's being dug. It's a loaded opening not only for the plot, but for what the film perhaps represents as an alternative to the mainstream (and indeed independent) movie distribution system. While the rest of Hollywood was running around like headless chickens and constantly coming up with new brain-dead ways to fight piracy (firmly closing as many doors as possible once those particular horses have bolted) Steven Soderbergh slipped in with his Section Eight production company and signed the kind of deal that would make most of the old school (i.e. short sighted tunnel visioned money grabbing dicks) sweat into their cheque books. The idea is to finance six films, shoot them on high definition video and release them instantaneously at the cinema, on DVD and on television giving the audience the largest possible choice and resisting the idea to milk a single film for as long and as often as possible. It's not a surprise that Soderbergh is the brains behind such an audacious move (we've been in love with the guy ever since he got Laura San Giacomo to diddle herself silly in sex lies & videotape all those years ago) and we're happy to report that the first of these films, Bubble, is a delight.

The cast is made up of non-professional actors that give the proceedings a sense of realism reinforced by the mediocre lives that are being spread out before us. Martha and Kyle are friends by default at a doll factory in small town Ohio. Kyle loves his weed, lives at home with his mom and after a repetitive day popping freshly moulded doll heads out of Kafka branded machinery starts the night shift at the local shovel factory. Martha spends her working day airbrushing creepy doll faces only to go home to sit with her elderly father making doll clothes for an extra buck. "It's a lot of fun," she says without a hint of irony. You get the feeling that this is just regular American life with the highlights of Martha's day being breakfast and lunch with Kyle. That all changes when new girl Rose starts at the factory.

What starts out as social commentary drifts easily into a murder mystery as the new girl disrupts everything around her and a tragedy unexpectedly unfolds.

The cast is outstanding - all recruited by Soderbergh from Ohio - with Debbie Dobereiner's Martha being the most interesting character study. Dustin Ashley's Kyle mumbles his way through life only to open his mouth properly when Detective Don Taylor (Decker Moody) enters the story (the detective comes into the film quite late on but his easy attitude nails the small town cop mentality perfectly). New girl Rose (Misty Wilkins) has just enough vamp in her to pull off the low rent siren turning not just Kyle's head, but also questioning Martha's settled view of her tiny life: It's so poor here...

How successful the new distribution model will be is still unknown, but if all the films come in on a low budget and with artistic returns like this one then it's an experiment that should be encouraged. Who needs to wait the better part of a year and watch a fortune wasted on big budget junk if real movies can be sneaked out in the time it takes to pick a trailer for Tom Cruise and the rest of the Scientology nutsacks?

Quick mention also for the excellent score by Guided By Voices' Robert Pollard.

Bubble plays on Wednesday 26 October at 2pm and Sat 29 October at 6.30pm as part of the Film on the Square strand of the Festival. 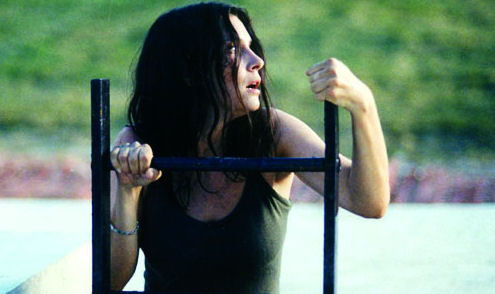 Trust the French to tackle the walking dead from a metaphysical and dogmatically mundane standpoint. Where American film makers see an opportunity to rip throats and explode heads our escargot swallowing cousins are more concerned with the logistics of getting the resurrected back to work and finding a way of monitoring them that doesn't infringe on their basic human rights. Great stuff.

They Came Back (Les Revenants) opens with the recently deceased emerging from their cemeteries en masse, and although the phenomenon is occurring all over the world the film concentrates on the effect the newly returned have on one small provincial town. No shuffling decomposing corpses ala Romero here. Although there is still a lot of shuffling as the majority of those returned are over 60. Nor do they return in their burial clothes - rather they resemble the fondly remembered images that their loved ones have held onto in their absence. They're also in the best of health, but seem to be a little distant from those they left behind. Like all good variations on The Monkey's Paw the dead always come back a little... different.

It takes a while for the French authorities to put their collective finger on what exactly that difference is as their first task is the purely administrative one of collating information on and rehousing the dead in makeshift medical centres as if they were refugees - which in a way is exactly what they are. While this is unfolding it's easy to imagine the American response simply shadowing the Romero solution or perhaps issuing the dead Guantanamo orange. Over here it'd make great reality TV while the Tories would demand they all be deported (although counting dead votes may be the only chance of them resurrecting their party). Meanwhile back in France civil servants tackle the problem, meetings are called and effects on employment levels are studied.

If all this sounds dull it isn't. It's just a slightly satirical backdrop for three separate stories to unravel and entwine. A young man reconnects with his wife, not recognising the years that have passed since the car crash that killed him. The town's mayor struggles to offer advice while dealing with his dead wife and a couple bring their dead child back home hoping that things will be just as they were. They're not.

The dead begin to congregate secretly, they remember and mimic things perfectly, but seem to lack the aptitude for complicated tasks. Those that can work are delegated to manual labour, but all share something that is foreign to their families and loved ones.

It's not a horror film by any stretch of the imagination, but it does serve up some choice uneasy sequences. The dead suddenly appearing in a night time forest, the blank looks that the returned adopt, and most interesting of all the surveillance footage that separates living from recently dead by their heat signature... it's grim in parts, but also funny, works as social satire and as with the best of Romero you can see the dead here as cyphers for a number of society's ills, but it works best perhaps as a straight forward tale of how people would cope if the dead did return without wanting to chomp on your liver.

Tomorrow we'll bring you details of the hilarious follow up to Noi Albinoi- a slacker comedy with heart Dark Horse and Matt Dillon's delicious turn as Charles Bukowski (sort of) in Factotum.