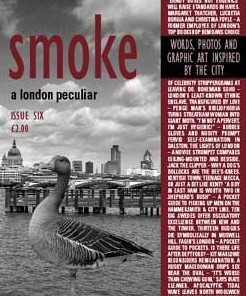 Maybe we just take it for granted that everyone who reads this website will be picking it up anyway, or maybe because it's a quarterly it slips under our radar sometimes. But it shouldn't do because it's a great little publication and if you haven't read it before then now's the time to start because issue number 6 just came out and it's a doozy.

Take this excerpt from an an article entitled Naked in Dalston by Ben Kersley:

Last summer, Euro 2004, making a nod towards male bonding, I invited a load of friends over to watch the opening England game. Ten minutes in, I looked around and not a single eye was on the match.

"You know you’ve got a naked woman opposite?"

You just don't get stuff like that anywhere else do you?

Other stuff in Smoke no 6 includes an article on Briggs the Babers in St James's, short fiction by CK Gilchrist, a piece on the Millennium Bridge by Matt Haynes, the unmissable Bus of the Month, plus the usual poems, drawing and photography.

Issue 6 of Smoke costs £2 and is avalaible at these stockists.