October Is An Arts Fest 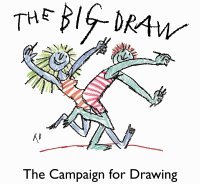 Cripes, we not really sure where to start. So many exhibitions and only 31 days to see them all in – just remember to pack your brolly because looking outside it seems winter is here again.

Tomorrow marks the opening of Edvard Munch by Himself at the Royal Academy. There are over 150 works on display, mostly self-portraits, that span the stylistic and psychological changes he went through during in his career.

To put it in layman's terms, like most artistic geniuses, Munch was a bit of a freak. After a dodgy breakup he shot himself in 1903, suffered a nervous breakdown in 1908 and lived the last 20 years of his life in isolation as a virtual hermit. But all this makes for great art and these rarely seen self portraits are fantastic studies in self analysis. Keep an eye for art thieves however – Edvard Munch is pretty high up there on the old cat burglars' list of favorite artists to steal.

Throughout the whole of October the sixth Big Draw campaign will be taking place. Big Draw!

Drawing Power has a simple aim - to get everyone drawing. Events kick off on Sunday with a gargantuan street festival that will take over Exhibition Road. The event offers a wide range of free activities and artist-led workshops in and around Exhibition Road, from South Kensington tube up to Kensington Gardens. Everyone can join in the carnival parade leaving the V&A at 3.30pm for the Serpentine Gallery where Quentin Blake, Gerald Scarfe and Posy Simmonds will lead the program and add their drawings to 'The Big Picture Frame'. This will be just the first of many events around the country this month – for a full breakdown of events visit drawingpower.co.uk.

Tate Britain is putting on a sure fire commercial success in Degas, Sickert and Toulouse-Lautrec: London and Paris 1870–1910 (5 October 2005 to 15 January 2006). Not really this Londonista's bag but it looks quite a swanky survey of absinthe indulged Paris at the turn of the century. Fans of Moulin Rouge start queuing now.

Next up Beatrix Potter: Artist and Illustrator opens at the Dulwich Picture Gallery on 12th October 2005. This show promises to be a broad survey of everyone's favorite childrens book illustrator of dressed up vermin: showing early sketches, unfinished and first drafts of her illustrations, designs and finished watercolours.

Not many people know this but Beatrix Potter was a Londoner though and through. She was born into a prosperous and artistic family and lived in South Kensington. So there you go. 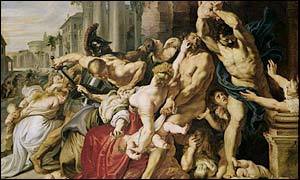 And finally Rubens. And artists, exhibitions and big breasted women don't come much bigger than the in the National Gallery's Rubens: A master in the making (26 October 2005 - 15 January 2006).

The show aims to document the early career of this God of Baroque art from his early days in Antwerp, his discovery of Caravaggio in Rome, through to his triumphant return to his homeland in the second decade of the seicento. The culmination of the exhibition will be the hanging of the world's most expensive old master painting The Massacre of the Innocents (Sold at Sotheby's in 2002 for £49.5 million to Lord Thomson and loaned to the NG) and its pendent 'Samson and Delilah' for the first time since they were in the artists studio. Do not miss this one.