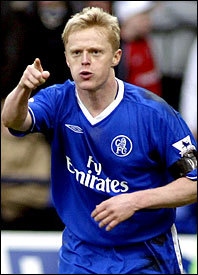 Just like Arsene, we believe in bringing through fresh young talent. So whereas the Gooners might have Fabregas, Van Persie, Clichy and Flamini, we've got....Dave. Dave come to us through our recruitment drive , and we'd be happy to hear from any other budding sport writers out there. But for now, over to Dave....

Rest easy Chelsea pensioners, unlike a Labour party conference you will not be forcibly ejected from the ground if you do feel the urge for the odd piece of heckling at Anfield on Sunday. However let’s hope the game is a bit more entertaining than Wednesday’s Champions League tie, which was about as exciting as an episode of 'Last of the Summer Wine'.

Some very interesting looking games this weekend including what could be a feisty London derby at the Valley. Here are our predictions for this weekend:

Nosebleeds all round at the Valley and White Hart Lane this season due to both clubs slightly elevated but entirely deserved league positions. No European football for either club this week so both teams will be raring to go. This has got a draw written all over it.

A last minute Ruud Van Nistelrooy winner gave United a much needed win in the Champions League in the week and they face another tough examination at Craven Cottage on Saturday. Both sides have been gravely inconsistent in the league so far this season so this one is hard to call but we fancy a little upset here with Fulham nicking the win.

Only the temporary blindness of referee Mike Dean cost the Hammers three points during their entertaining goalless draw with London rivals Arsenal last week. Alan Pardew has got his boys playing some very entertaining stuff at present and they’re looking pretty tight at the back too. Sunderland finally got their first win of the season last week in the derby game against Middlesbrough and 40,000 fans at the Stadium of Light will be hungry for more. Honours even here we fear.

The Gunners will be purring after a fantastic victory in Amsterdam in the week. Arsenal became the first team to beat Ajax in Holland since Tottenham in the 1981/82 season and this was without several first team players. Bergkamp, Van Persie, Gilberto and Lehmann should all return although there is a slight injury worry over Kolo Toure. Jermaine Pennant will be eager to please on his return to Highbury and could prove a real threat from the wing but this should really be a comfortable three points for the Arsenal.

{Yawn}excuse us. We're still kicking ourselves after not putting any money on Wednesday’s Champions League game being a boring 0-0 draw. Beware, both of these sides can make George Graham’s Arsenal team look like a classic Brazilian side. But saying this there are plenty of world class players on show so anything could happen. We do however predict a red mist descending upon Anfield after sensing some increasing bad relations between the players on Wednesday. Oh and of course another goalless draw.