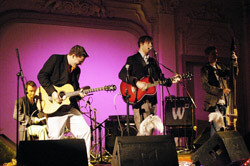 It's proper gig going weather now, so no 'it's a shame to waste the nice weather' rubbish, get thee to a venue and immerse yourself in the glory of music. And then come back stinking of cigarette smoke because the girls next to you spend more time holding their fags in a posey manner near your face, instead of actually smoking them.

Anyway, more details of a gig we mentioned on Wednesday. The Sways play Water Rats tomorrow night. That you already know. What we neglected to mention is that the gig is a fundraiser for Amnesty International, so you can feel free to stand there smugly whilst being entertained by the madness/genius of The Sways. 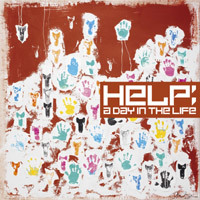 Another good cause we like here in the Music Dungeon is War Child. In what is proving to be a bad week for the Music Dungeon, we forgot to remind you on Monday that the Help: A Day In The Life album was released in ye olde ancient CD format this week. If you haven't already done it, go out and buy it now. If you're too lazy to go out, or the weather's too miserable for you, then you can download it from 7digital.com.

Turin Brakes pleasantly surprised us with JackInABox, and it seems that a recent tour of the US was an eye-opener for the band in that they stumbled upon what they think is an ideal format for live performances. See them in action in the unlikely surroundings of the London Palladium on 6th November. Tickets available from gigsandtours.com.

Fans of German electronic music will be pleased to hear that Ulrich Schnauss will play his first show in 18 months on 21st October, when he plays Club AC30 at Water Rats. Influenced by the likes of Cocteau Twins, My Bloody Valentine and Slowdive, his favourite band is Chapterhouse. Ulrich has a formidable reputation grown by word-of-mouth, and has remixed the likes of Longview, Depeche Mode, Rachel Goswell, Mojave 3 and Slowdive. For the AC30 show Ulrich will be joined on stage by Judith Beck on vocals and guitars.

Finally, if you, like us, you're happy to show up at random shows where you've never heard of anyone on the bill, in the hope you'll see someone good, you could do worse than go to the Diversity Unsigned Showcase at RADA. The press release bigs up the show by pointing out that past artists include Steve Brookstein, winner of X-Factor last year, and Chris O'Neil, who played George Harrison in the film Backbeat. The event is run by Sounds of Eden, whose website you should check out for more information.

I am the king of Boggle, there is none higher. I gets 11 points off the word 'quagmire'...