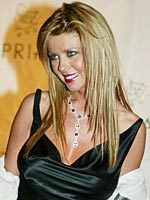 Yes it's another of those 'US celebrity flies over to London and does something outstandingly bizarre' stories, and amazingly enough this one doesn't feature Mariah Carey.

This time it's badger-faced starlet Tara Reid who's casuing all the ruckus.

According to reports, Ms Reid is in town filming her reality TV show Wild on Tara (we can't wait either).

While checked in to the Baglioni Hotel Reid apparently "booked herself into one of the most expensive suites at around £2,000 (€2,930) a night but then requested a second room to to keep all her shoes."

A hotel 'insider' is quoted as saying "She said she'd collected all these shoes while she'd been travelling around Europe, but quite why she has to house them separately remains a mystery."

Channel 5 are now beleived to be interested in approaching Tara with a new reality series pitch to be entitled 'Tara Reid: crazy as a bag of bees'.