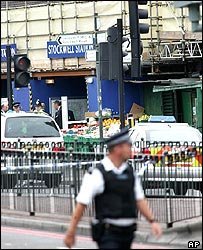 There's an interesting special report over on the Guardian this morning about a man who was being sought by the police team who killed Jean Charles de Menezes.

Abdi Omar was a friend of bombing suspect Hussain Osman and lives in a flat above the one that de Menezes was living in. The building was under surveillance after Omar's gym membership was found in one of the bags that failed to explode - Omar had lent the membership card to Osman. When de Menezes left the building on the morning of his death the surveillance officer was in the bathroom which led to the Brazilian being confused for Mr Omar.

The family said three plain-clothes officers with submachine guns surrounded his wife, Aziza Hassan, the couple's 12-year-old son, and her 74-year-old mother as they emerged from their home off Harrow Road, west London. "She suffered a heart attack, and although she is now out of hospital, she needed heart surgery," said Mr Omar. Scotland Yard would not comment, other than to confirm that a complaint was being investigated.

Mr Omar returned to the UK two weeks ago and contacted the police who by then seemed less concerned with him as a suspect. "They questioned me like they weren't interested. They asked me: 'Why do you think we are suspecting you?' I said: 'I don't know'. By this time they knew all about the gym card, and they told my lawyer later that they were not interested in me."

Yesterday the Guardian reported that the police are expecting a bumpy ride as the investigation continues...