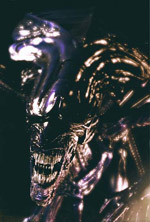 Out there in cloud cuckoo land and obviously not wanting to let Sharon Osborne's blistering return volley at Iron Maiden (it's like the Alien Queen versus Ripley) take all the pop column inches, pugilist, prol poet, and one time popcorn pusher (at the Prince Charles dontcha know, he used to punch tickets as well as journalists) Pete Doherty took time out from actually turning up to play a gig for once to headbut Razorlight's Johnny Borrell. Liam and Damon were never this much fun. We want our Britpop years back, we was robbed. Just as well they're both scrappers and not rappers or who knows what would have happened! Of course all the above pales into comparison as soon as Charlotte Church had an attack of the terrible teens and weighed in with the heavy stuff. We'd stop going on about all these rock fueds if they weren't so entertaining. Screw Lost, just read the NME.

Now if you were hoping to see either Garbage or Adam Green this year then sorry to be the bearers of bad tidings but you can't. Because they're all big girls' blouses. Small consolation then should come with the news that the original Tori Amos is back with her first album in 12 years. Ah! Baboushka yiee yiee.

So who to see this week?

Thursday. Brighton's latest scruff bags the Kooks are at the Islington Bar Academy.

Update: The Bravery are playing an instore at HMV Oxford Street tonight. Entry by wristband available from the store. If you're going just pray they don't repeat that gudawful cover of Akon's Lonely they did on CDUK last week.

Friday. Well you could a whole hell of a lot worse than head back up to Koko to catch some 3 girl punk mayhemSleater-Kinney and you might even bump into the Londonist 'M's.

Saturday. London's own scuzzy rock'n'roll gunslingers, The Rifles take their turn on the Mean Fiddler stage for Frog. Doors at 11. Night bus home.

Sunday. Sunday, we highly recommend you find out where The Who and McFly are going to be recording a version of My Generation and steal all the microphones Mike Skinner stylee before anyone does anything stupid. Please God, don't let them do this to us.

Monday. Purveyors of Advanced High Level Sectional Articulation and thherefore utterly barking but brillaint We Are Scientists are at the Barfly. Alternatively horror punk misfits, the, er, Misfits are at the Underworld.

Tuesday. If you can somehow find a ticket to see Elbow at Koko the we strongly suggest you go. Otherwise Bob Mould's at the Mean Fiddler and out of time 70s stoner rock hippies My Morning Jacket are at the Scala.