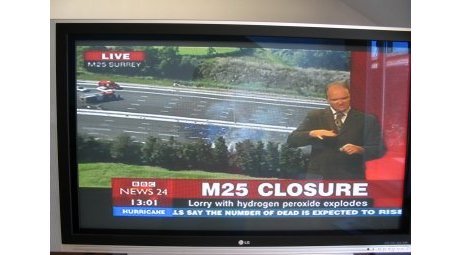 The BBC is reporting that a lorry carrying chemicals has exploded on the M25 south west of London.

No real details yet, but all lanes are closed.

We'll update as we know more.

13.05: It seems the lorry exploded between junctions 12 and 13 and was carrying hydrogen peroxide, but there is no news yet of anyone being hurt. BBC News 24 are reporting a major chemical incident and already there are reports that sections of the M25 will have to be re-tarmaced before it can reopen.

Surrey Police say no-one has been hurt but drivers are being advised to avoid the area.