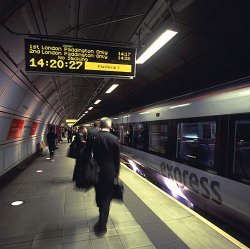 A woman and child, perhaps her daughter, have died after being hit by the Heathrow Express according to the BBC.

Another child, a two year old boy, survived and has been taken to Ealing Hospital.

It looks like the three jumped from the platform at Southall as British Transport Police are not treating the incident as suspicious.

Major disruptions are now expected and there is currently no service between Reading and Paddington. But First Great Western tickets will be accepted on South West Trains services between Waterloo and Reading either direct or via Basingstoke.

UPDATE: The boy also died and it has been confirmed that it was indeed a family. The mother aged 27 and her daughter aged five died at the scene. The boy now confirmed as only nine months old died later in hospital.