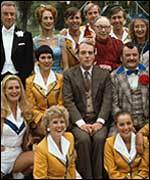 Everyone has fond memories of Hi De Hi. Londonist used to watch, mouth agape, dumbfounded by the idea that anyone would consider enforced jollity and strictly regimented 'fun' to be their idea of a good holiday. The best thing about Hi De Hi was how it made this Londonista's usual holiday - a week in a tent in Wales - look like the epitome of holiday freedom by comparison. Sheep trying to eat the tent: check. Non-stop rain: check. Surly locals who pretended not to speak English: check. But at least there weren't any burks (should that be Buerks?) in garish red or yellow blazers, faces stretched into a rictus of menacing good humour, making us compete in the egg-and-spoon race. Well, some genius at Channel 4 has decided it would be an awfully rum wheeze to get a load of ordinary Britishers, used to the luxury of cheap flights somewhere hot, put them into a Hi De Hi-style death holiday camp, and film the results. Will the happy campers be content when they see their, ah, basic accommodation? Will they take the strict schedule of 'zany' contests without a fight? Haha, of course not! This is 'reality' TV, after all. Watch Wakey Wakey Campers (Tue 9pm C4) and give thanks to the orange god of Easyjet that we don't live like this any more.

It's a shame the Beeb have decided to schedule Messiah IV: The Harrowing (Tue 9pm BBCOne) against Wakey Wakey; the plot seems reminiscent of The Dante Club, one of this Londonista's favourite books, in that it seems to deal with a killer intent on reproducing famous punishments from the Inferno. Also, the title Messiah IV: The Harrowing sounds like one of the doorstop fantasy epics Londonist buys in secret from the Forbidden Planet shop, then is unable to read on the Tube due to the embarrassing cover art. Ahem.

Poor Kerry Katona. No, really. Not only has the poor lass been on a very public rollercoaster taking in rehab, public humiliation and manic partying ever since the split from Ugly Fat Brian From Westlife, she also lives in Warrington. Warrington's sole redeeming feature is an aircraft hangar-sized Ikea, FYI, all you ultra-cool urbanites who have never been north of Watford. Oh yes, poor Kerry. ITV - in their benevolent wisdom - have tried to alleviate the symptoms of being-from-Warrington-ness in their new reality show, My Fair Kerry (Wed 9pm ITV1), where, à la Eliza Doolittle, Kerry will be bullied taught to speak "proper" and told which fork to use for the fish course (Londonist posh dining cutlery tip: start at the outside and work in). She then has to convince a load of stuck-up twats in Vienna that she's a genuine, proper lady, which, thanks to Little Sodding Britain, is now impossible to say with a straight face. We're sure she'll do us proud.

There's more serious stuff from Channel 4 in the shape of The Year London Blew Up: 1974 (Thur 9pm C4) and The Road To 9/11 (Sat 8.05pm C4). Watch 1974 for a welcome reminder that yes, Al-Qaeda are utter arseholes, but the IRA, with their Oirish twinkles and blithe disregard for human suffering, could give them a run for their money any day. It's all scarliy relevant in light of the July events, and another reminder - as if we needed one! - that London will endure, in spite of nutters with backpacks full of Semtex. The Road To 9/11 looks at how the current shitstorm in the Middle East came about, hopefully with special reference to the meddling of (neo-)imperial powers in the region, which inflamed Arab opinion against the West, which contributed to ... 9/11. Yes, dear readers, believe it or not, foreign policy can have an effect on domestic events(!). What a novel idea - someone ought to tell Tony Blair.

If watching The Truth About Female Desire (Tue, Wed, Thur 11.05pm C4) can tell us why Britney chose Kevin out of all the men in the world, we'll consider it our duty to watch. Actually, scratch that, we live in a world where Alan Titchmarsh is considered a pin-up; no "truth" the researchers come up with, through their study of a houseful of women, could ever explain that.

TV Troll's must-watch TV is, as ever, Lost (Wed 10pm C4) and X Factor (Sat 2.45pm/7pm ITV1). This week on Lost: Jack goes on a quest, as water supplies run low. Does anyone else get a Dagobah vibe from the interior of the island? We keep expecting Yoda to pop out from a cave and start hobbling around dispensing gnosticisms. What Yoda would make of X Factor is another question entirely. "Painful, this is"? "No talent and attention seeking, to the Dark Side lead"? Brain-treat of the week is a tie between Bite Night: Sharks - Silent Killers/Celebrity Sharkbait (Sun 6pm/9pm ITV1) and The Ultimate Film (Sat 9.05pm/Sun 8pm C4). Londonist has some pretty firm ideas of who deserves to be fed to sharks, starting with Pete Doherty, but is sorry to report that, due to pesky health and safety rules, none of the celebrities featured on the Sharkbait programme will actually end up dyeing a patch of ocean red. Shame. Also, anyone with half a brain knows that Commando (Arnie communes with the animals! Then kills an entire army's-worth of bad guys!) is the Ultimate Film, but given that the people who decide these things have an irritating habit of choosing some snore-fest like Pulp Fiction or Citizen Kane, we're not holding our breath. At least the behind-the-scenes footage and cast/crew interviews ought to be worth a look.

Finally, have you ever wondered how TV production companies find the schmucks who appear on their shows? Wonder no more. We're particularly appalled/intrigued by this ad:

We're particularly looking for two types of couples who are tying the knot this summer. 1. We want to hear from couples who are very traditional, proud to be British and getting married in the "right and proper" way. 2. Secondly, we're looking for a "Chav" wedding with all that entails. Loud and proud characters as part of the stories are essential. Only people who would be happy to be followed up to, and including their big day should apply.

A chav wedding? We're counting down the hours. Bring on the Burberry bride! Is it just us, though, or does the chav wedding sound a hell of a lot more fun than the "right and proper" one? Tennant's Super T all around! A plus, ô cher/chère lecteur/lectrice.