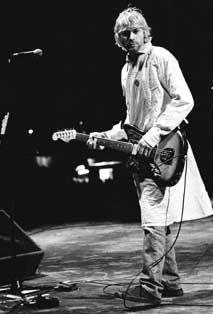 This weekend see the start of another 'popular culture' exhibition at the Proud Gallery in Camden (the other one is on the Strand).

Sometimes the Proud's exhibition schedule can maybe look a little 'fluffy' against some of the capital's more heavyweight contenders. But popular culture is what the Proud galleries do best, and their quality control is pretty good too. So if you can get over the fact that they're actually called the 'Sony Ericsson Proud Galleries' then it's well worth a visit.

This latest exhibition is Living the Moment: "a collection of original photographs and sounds capturing some of the world's most unforgettable live music moments, brought together in one unique exhibition."

So you've got (among others) Nirvana at Reading (pictured), Iggy Pop at the Scala, Led Zep and Pink Floyd at Earl's Court, and PJ Harvey in that pink catsuit at Glastonbury.

But these days, no self-respecting press release is complete without some kind of poll result attached to it, and Living The Moment is no exception.

So we can now officially tell you that the 'Best Gig Ever' (haven't we been here before?) is Queen at Live Aid in 1985, while 'The most controversial gig of all time' is (unsurprisingly) The Rolling Stones’ 1969 Altamont gig performance.

What's that? You want more made up music-geek trivia to argue about in the pub? Ok then:

Bob Dylan’s Manchester Free Trade Hall gig (1966) was named the best solo artist performance (because of the 'electric element'), while the best festival gig was considered to be Radiohead at Glastonbury (1997). In the dance/hip-hop category the Run DMC and Beastie Boys' joint show at Brixton Academy took the prize.