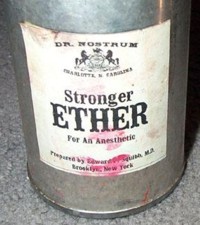 The theatre collective Shunt have finished with their show Tropicana, which was performed five nights a week from September last year in the cavernous labyrinth under London Bridge, scaring, baffling and amazing audiences who dared go through the "Staff Only" door in the station foyer. Londonist bought a ticket and tried to describe the experience, but really, you had to be there to believe it.

Well, they're doing it again. Shunt are performing their new show Ether Frolics in the vaults in a short run before moving it to the Edinburgh Fringe Festival at the appropriately named Smirnoff Underbelly. In collaboration with theatre makers Sound and Fury, Ether Frolics will explore the history and contemporary practice of anaesthesia and questions of consciousness. With the combined creative forces of Shunt, Sound and Fury and the eerie and unusual performance space itself, it won't put you to sleep - more likely, it will keep you awake for several nights after you've seen it.

What is an ether frolic? Hunter S Thompson, sadly deceased connoisseur of narcotics explains the lure of the old Victorian parlour party popper:

... it makes you behave like the village drunkard in some early Irish novel... total loss of all basic motor skills: blurred vision, no balance, numb tongue - severance of all connection between the body and the brain. Which is interesting, because the brain continues to function more or less normally... you can actually watch yourself behaving in this terrible way, but you can't control it.