Imagine that you find yourself strapped into a chair and forced to watch nothing but documentary images of death, murder and horror for twenty four hours a day. Imagine being suspended in the centre of a room with every surface showing a fresh atrocity, every screen offering an unending reel of carnage for every second that you have your eyes open. Food is funneled in (and out) intravenously, the pipes bolted into your body. This is your life for a full year.

What would you do when one day the door is opened and you find yourself free to go?

Well if you're Michael Jones you go to Los Angeles and set yourself up as a private detective.

This is the world of Desolation Jones, the latest comic book from the ever prolific Warren Ellis. This is the writer who gave us the superhero genre's first (openly) gay couple in The Authority, and the Hunter S Thompson inspired Spider Jerusalem in Transmetropolitan. His take on an ultra high-tech international rescue team, Global Frequency, was adapted for television but ultimately rejected. You can't kill something this good though and when the unseen pilot episode was leaked online recently a grass roots campaign started up immediately to give the show a voice (Did we see it? Yes. Did we love it? oh yes) If the show does indeed rise once more then it could easily knock a fist or two through the likes of the current American franchises and establish itself as a kind of Mission: Impossible for a fresh, globally-connected generation.

Londonist is a long-time fan of Ellis (we originally met at London's first flash-mob, invading a sofa store) and we were eager to get our hands on his new book. Especially when we heard that the art work was provided by JH Williams who so beautifully brought Alan Moore's Promethea to life. Keep tuned after the jump for the low down.

We loved the LA setting despite having no great love of the city (sorry LAist!) and we wondered why a writer based in an English seaside resort was drawn there. We caught up with Ellis just prior to the release of the first issue and asked him, why Los Angeles?

"It conveys the sense of being trapped more than any other Western city, to me. I find the place to be genuinely strange - not least because it's not a city, it's a handful of towns stuck together with a thousand miles of freeway. What's more, it's a Mecca for failure. There are very few places like it."

A stranger in a strange land then?

"I feel that way in LA. Possibly because I don't drive, and am therefore stared at like a freak when I walk around West Hollywood. San Francisco feels like home. LA feels like the moon. The general confusion and strandedness that Jones generally experiences is very much sourced in my LA visits. I can't find my way around the bloody place. I have a pedestrian's sense of direction. The cabbies are useless. I can't go anywhere in LA without the kindness of friends. It's like being confined to a wheelchair in a city of nothing but staircases".

Jones lives in a Chemosphere, that we recognised as the John Lautner one. Ellis tells us, "I've never been inside it, but I love that building, and it just fit so well with Jones' experience of LA - living inside a crashed flying saucer, an alien abroad."

Desolation Jones then is anything but a conventional detective story, but along with the LA setting, the story has more than a few nods to Raymond Chandler, and Ellis is quick to acknowledge the referencing.

"Once I came to the idea of an English spy trapped in LA, I was looking for story forms that spoke to the LA experience. Which leads you pretty inexorably to the Philip Marlowe stories. So I took them as starting points… Jones is a strange little book, I wanted to start people off in it in a way that provided a sort of comfort level, a certain odd familiarity. And then I get to screw with that by stages. That's fun." 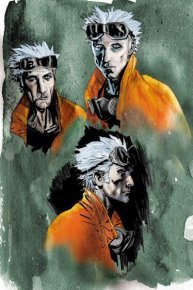 That comfort level is certainly lost by the time the first violent scene is reached, but Ellis is keen to distance it from the "fantasy violence" that dominates most other comic books.

"I saw no reason why the violence should be enthralling. Following the dictates of the hard-boiled detective genre Jones plays with, there had to be violence in every episode, but I didn't want it to be without consequence, you know? So, when it happens, it's stark and horrible, brings you right back down to earth - hopefully."

The supporting cast includes the wonderfully named Filthy Sanchez and, perhaps worryingly, she is actualy based on someone real.

Ah yes, the pornography. Every good detective story needs a McGuffin and here it's nothing less than home movies of Adolph Hitler – Paris Hilton style.

It's good to remember then, that for all the evil that the Dursts and Hiltons of this world do, that Ellis is out there every day doing his best to corrupt our youth in much more interesting ways. Jones, like some earlier Ellis creations, sports a tattoo. Surely an open invitation for the fans to take a copy of the book into their local tattooist. "The first issue is out in May, so I expect the first one in June". Ellis fans, it seems, are a rabid bunch. "The number of people out there with Spider Jerusalem-sourced tattoos is terrifying."

Despite the terror, Ellis has gone out of his way to open a dialogue with his fans through his acclaimed 'Bad Signal' mailing list and the now sadly defunct Die Puny Humans website. Over the years he has also warped young minds through the Live Journal community and most recently become a kind of online John Peel, releasing mix-tapes of unknown bands that he finds online via podcasts. Ellis is something of a pioneer among writers, using the Internet as an extension of everything he does, not simply as a marketing tool. And he has influenced more than a few writers to follow him online. Ellis plays this down:

"Well, I like having new stuff to read. Watching William Gibson returning to his blog has been nice - I'm one of the people he re-caught the bug from, I think, we first got talking because he read mine. And seeing John [Rogers] deal with an audience again in the years after having left stand-up has been fun. He'll be a vegetable by the end of the year, you mark my words."

The Internet then is integral to Ellis' work and he uses it to research "something like 90%" of his work. No surprise then that Jones too has his own online presence in the form of a website featured at the top of each story. "It's the new equivalent of a client walking into Philip Marlowe's office, distant and alienated 00's style. It's the face of modern transaction - you can buy anything from sex to washing-powder through a website, after all".

The Internet has been good to Ellis who has benefited from being an early adopter of technology: "I have a circle of friends and colleagues that spans the whole world, and a handheld device that keeps me in touch with them wherever in the world I am. I jumped into the net feet-first in the 90s, and the handheld is very much my outboard brain now. I'm answering these questions on it, in the pub".

Desolation Jones is a long form serial published by DC/Wildstorm intended to run for at least the next two years. The first issue is on sale now and is intended for 'Mature Readers'. Warren Ellis continues to corrupt all comers to his website www.warrenellis.com.