The Beach Is Back 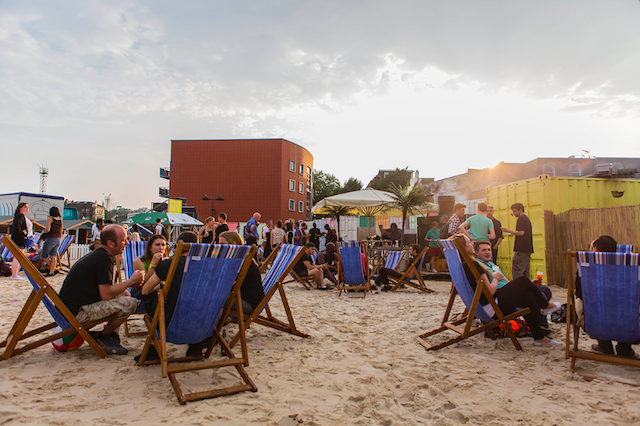 Fighting for space on the sun-baked sand* is not commonplace in London. Slightly itchy grass which it later transpires contains an ants' nest, yes, but sand? It can only be the return of Camden Beach on the terrace of the famous Roundhouse.

40,000 people claimed towel-space at the urban seaside last year, and this summer it's claimed to be even bigger. Covering a 900 square metre area, the free beach incorporates a Tiki Hut, Rum Shack, hot dog stand and Pork BBQ Bar. On the down side, this means no food and drink can be brought into the venue, so leave the picnic hamper at home.

We went along last year and passed a pleasant evening watching the acrobatic wonder of Gorilla Circus's trapeze school, which had shacked up alongside the beach for the summer. Sadly, it doesn't look like Gorilla Circus will be making an appearance in Camden this year, so be sure to take a beach novel to while away the hours.

Deckchairs are limited, so take a towel to sit on the comfortingly-damp sand while you wait for your turn in the deckchair pecking order. If there's a group of you going, it's possible to hire a beach hut for up to eight people, with seating, a television and fan, and various food and drink packages. Starting at £250 though, it's no drop in the Regent's Canal.

A fundraising opening party takes place on 25 July, with some big name DJ sets including Eliza Doolitte and Lliana Bird. Tickets are £55-£75, which goes towards The Roundhouse Emerging Artists Programme, helping young people get into the music industry.

*Sand guaranteed. Sun, not so much.