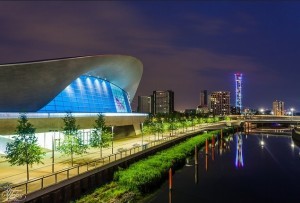 Stratford and the Queen Elizabeth Olympic Park could get an economic and cultural boost under plans announced by Boris Johnson today.

The snappily-named 'Olympicopolis' will be designed by the winners of a competition to find a team of architects, planners, landscape designers and engineers, and is expected to reside on Stratford waterfront.

A re-zoning of Stratford's stations into zones 2/3 may also be on the cards — a report by think tank Centre for London earlier this year prompted calls for a move to maximise the Olympic legacy. The re-zoning is set to happen in January 2016, pending Department for Transport (DfT) approval and will set TfL back £7m per year, though commuters and visitors will feel the benefit.

The Victoria and Albert Museum and Sadler’s Wells will be part of the Olympicopolis project, while University College London will move to a site near the Orbit sculpture. Transport for London (TfL) and regulatory body the Financial Conduct Authority (FCA) are also due to relocate to the park. Boris Johnson said:

"Our goal is to create thousands of new jobs whilst driving up the life chances and opportunities of local people to match those enjoyed across the capital."

Olympicopolis, announced in chancellor George Osborne's infrastructure plan, is believed to have the potential to create 10,000 jobs in the Park and an extra £5.2 billion of economic value from the area. A report released last summer revealed that the mayor had missed targets on jobs as part of the Olympics legacy.

The Queen Elizabeth Olympic Park re-opened in April this year, nearly two years after the 2012 Olympic Games. See our video of the best bits.