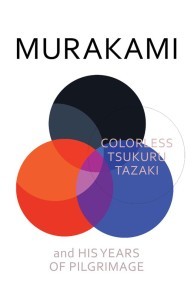 If you're feverishly counting the days until 12 August, when the new Haruki Murakami novel is pubished, we have some exciting news about some exciting events.

You can be among the first to get hold of the new book — snappily titled Colorless Tsukuru Tazaki and His Years of Pilgrimage (did he get bored of brevity with 1Q84?) — at either of these midnight events:

If you can hold on until 30 August and you're willing to get to Waterstones Piccadilly early, you can buy a copy and get it signed by the man himself. We do mean early though — only the first 200 will get to meet Murakami. If you're one of the lucky ones, do try not to have a meltdown in front of him.

Update: there's another event happening on 26 August at the Japan Foundation on Russell Square. Dr Gitte Marianne Hansen of Newcastle University will explore some of the connections and meanings between colours and characters throughout Murakami's work of Haruki Murakami, including Colorless Tsukuru Tazaki and His Years of Pilgrimage and Norwegian Wood. Free, prebook, 6.30pm