GIVE BLOOD: Today’s opportunities to donate blood are outside County Hall in Waterloo and Freemason's Hall in Covent Garden. Free, just turn up, see site for times and conditions

CHELSEA FRINGE: Horticultural happenings across with capital continue this week with Chelsea Fringe festival. There are dozens of events daily to tickle your tillage — today try tree hunts, floral cocktails and sensory garden tours. Until 9 June.

BIRKBECK ARTS WEEK: University of London's Birkbeck is hosting a week of lectures, panel discussions, screenings and performances as part of its sixth annual Arts Week. See website for full listings, until 25 May

RAW WINE: Natural wines are celebrated at the RAW Wine Fair, where attendees can sample pure, unprocessed and environmentally friendly wine. £25/£25, prebook for cheaper tickets, open to the public 5-8pm

PROGRESSIVE CAPITALISM: London School of Economics eases us into the week with a lecture on progressive capitalism, hosted by Lord Sainsbury. Free, just turn up, 6.30pm 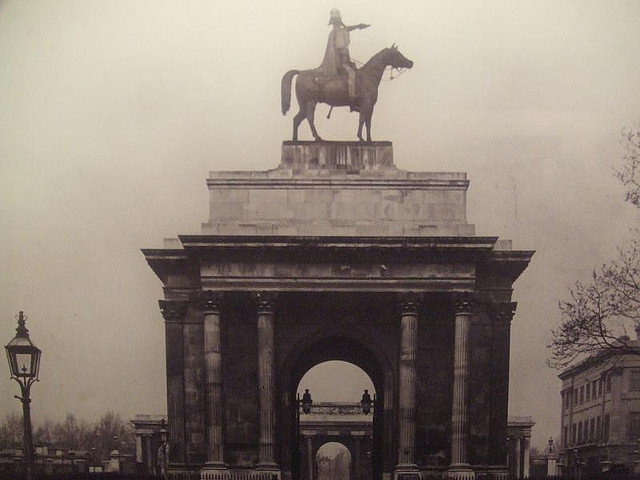 It's well chronicled that Wellington Arch (or Constitution Arch) on Hyde Park Corner was a former police station. Less well known is that it was also a private residence. The splendidly named Staff-Corporal Farrier Arthur Dick lived in the monument from 1897 until 1934, serving as the King's Gatekeeper. His duties included opening and closing the structure's huge gates whenever his or her Majesty wished to pass through. Dick also bred prize-winning spaniels and terriers in the Arch, and two of his sons were born there. The only substantial account of the man that we can find is in My Secret London (1932) by Maud Bigge, although a photo of Dick's funeral procession is online here. Oh, the statue you see on top also has an interesting story attached, but we'll save that for another day.

Good Cause of the Day
Thomson Reuters Foundation is a charity that provides legal, humanitarian and journalistic services to Non-Governmental Organisations. On 1 June they are  supporting The Sound of Change Live at Twickenham Stadium, where stars such as Beyonce, Jennifer Lopez and Ellie Goulding are performing to promote education, health and justice for girls and women across the world. Although the event is sold out, Thomson Reuters Foundation are giving away a pair of premium tickets to the event — find out how you can enter here.