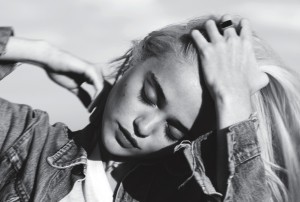 It feels as though Sky Ferreira's Everything Is Embarrassing has been around forever. It was certainly one of the noteworthy singles of last year but it took some time to figure out its release in the UK, which is finally happening in April. And not a moment too soon.

L.A.-based Ferreira seems to be making the UK a priority at the moment with a couple of back-to-back gigs in London, the first one on Tuesday night at the White Heat night at Madame JoJo’s followed by Wednesday's XOYO outing.

There's been much buzz and excitement around Ferreira ever since One and Obsession were unleashed in 2010. Then a teenager, the model, actress and singer was tipped to be the next big thing so it was a surprise when her career went very quiet for some considerable time. The record label apparently wanted her to be the new Britney but Ferreira had other things in mind.

In any event, it all looks set to be moving in the right direction for Ferreira this time round and, judging by the fact that XOYO was packed full of adoring fans, the temporary lack of actual purchasable Sky Ferreira records in the UK is incidental to her star potential.

Opening the set with Lost In My Bedroom, Ferreira's voice is immediately at war with the sound of her band mates' instruments, the latter winning by some margin. Ferreira does well to overcome the challenges of XOYO's sound system on the quieter numbers she airs live, including the stunning Sad Dream and Ghost. Here, you really get to hear the nuances and beauty of her voice. When Sad Dream ends, the crowd goes nuts and Ferreira is visibly taken aback by the enthusiastic reception it gets.

Having collaborated with quite an eclectic bunch of producers and songwriters such as Shirley Manson, Greg Kurstin, Jon Brion and Dev Hynes, there is a varied sound to the songs played tonight. On record, you would probably be surprised to hear subdued Americana cut, Ghost, alongside the upbeat pop of Lost In My Bedroom but Ferreira's voice suits both, equally. The only hitch is, when performed live, the rockier songs tend to drown her. Red Lips, which works brilliantly in its studio version incarnation, sadly loses its power on stage. Mid-ish tempo banger You're Not The One, however, manages to turn things round and sounds terrific.

Despite some awkward posturing when singing (perhaps through nerves), Ferreira comes across as a lovely, smiley girl-next-door during her occasional chats with the audience. Hers is a sweet disposition and you can tell she is not expecting the warm response she's been greeted with.

The highlight of the evening is, predictably, Everything Is Embarrassing. The track was produced by Dev Hynes, who has already given the world Solange's recent wonder, Losing You, and is currently working on tracks for Mutya Keisha Siobhan's new record. The song's beats and melancholy piano translate effectively to the live setting.

It'll be interesting to see how Ferreira develops as a live artist, as her star continues to rise and she plays other, perhaps bigger venues. We've found sufficient hooks to make us want to find out.

Keep an eye on Sky Ferreira's website for future dates.