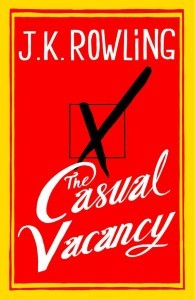 Tickets go on sale on Friday at 3pm for the launch of JK Rowling's new novel at the Southbank Centre. (If you're a member, you can buy tickets now.)

This post-Potter, non-kids book – officially called The Casual Vacancy, but might as well be subtitled What Joanne Did Next – is such a closely guarded secret that even foreign publishers won't receive the manuscript before publication, to prevent piracy. We do know that it's set in a small English village and is based around a local election which, according to the blurb, is "fraught with passion, duplicity and unexpected revelations".

JK Rowling will be reading from the book, talking about it with Mark Lawson and taking audience questions. Handily, the event starts at 7.30pm so you'll have time to get a copy and make a serious dent in it.