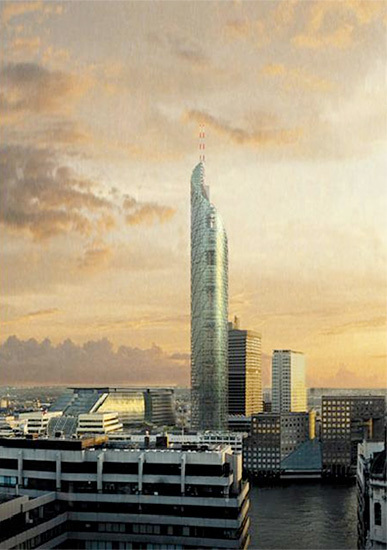 The year was 1998 and, having recently purchased Southwark Towers, a little loved 1970s high-rise situated next to London Bridge station, property developer Irvine Sellar was looking to make his mark on the capital.

Supported by a government document that lent weight to building densely around major rail stations, Sellar sought to build Britain's tallest tower. He engaged the firm of Broadway Malyan to draw up plans for a 366m skyscraper.

Unfortunately English Heritage and Southwark Council were not enthused by the design. Instead, Sellar met up in 2000 with the Italian architect Renzo Piano, who (as the apocryphal tale goes) sketched the outline for what was to become the Shard on the back of a napkin. Twelve years later, the building has just been inaugurated.

The idea of a circular riverside skyscraper is clearly one that Broadway Malyan favour: a high-rise designed by the firm, called simply The Tower, is currently under construction at St George Wharf, Vauxhall. Elements of the design can also be found in the currently-stalled Pinnacle tower in the City.

For more buildings that never were, see our Unbuilt London series.