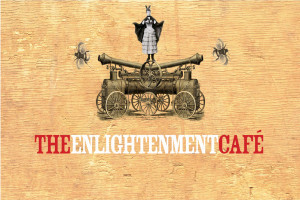 If you glance away from the boat parades and Union Jack ticker tape this weekend, you might just learn something. At the Old Vic Tunnels, science and theatre are on a collision course as The Enlightenment Cafe opens for the Jubilee weekend.

Based on the Coffee Houses of the 17th century, the cafe opens tonight and promises to challenge our conceptions of science, philosophy, politics and art: questioning why things became, and what will happen next. Combining powerful performances, interactive debates and renowned scientific minds, The Enlightenment Cafe aims to do just that: enlighten our minds through theatre.

It is a bold premise: exploring intricate, controversial ideas through performance – a premise that explicitly attempts to merge the boundaries between theatre and discussion. Fire scientists battle neuroscientists, microbiologists debate with botanists; rumours abound that Charles Darwin himself might make a surprise appearance.

The cafe, which runs for five nights, is brought to life by LAStheatre who specialise in interactive and immersive theatrical events. Their main aim is provoke the imagination, creating a night of promiscuity and invention that demands audience participation.

The project aims to project the audience back to the Victorian era, a time of rapid scientific and philosophical discovery. From a psychiatric clinic to the Institute of Dating Etiquette, you will be transported into the realm of the weird and wondrous. But it's not all high-brow, intellectual waffle, with a speed-dating tournament and live bands playing until the early hours of the morning.

The Enlightenment Cafe even references zombies and My Little Pony – the first ports of call for any aspiring radical thinker. So, after a day toasting the Queen's Jubilee why not celebrate the great minds of mankind down at the Old Vic Tunnels, and then dance the night away?