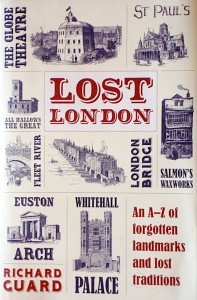 As the author points out in his introduction, although London is an elderly and magnificent city, very little that is ancient remains. Others have noted that we Londoners are a very unsentimental lot: until recently we swept aside with alacrity anything and everything the least bit redundant (cough, Euston Arch). While the Fire and the Blitz did indeed cause havoc, we ourselves have wilfully destroyed much by our own hand.

This Lost London should not be confused with Philip Davies’s coffee-table item of the same name from a few years ago. That is a chunky and magisterial photograph book covering merely 75 years, and it takes itself very seriously.

Our Lost London here, by Richard Guard, is altogether lighter. It is the size, format and feel made popular by Ben Schott of Miscellany fame; it uses illustrations not photographs. For all these reasons it is an eminently convenient read by bus, train, bath or loo. Here we have an eclectic collection of buildings, parks, people, features and activities which would have been commonplace to Londoners of yesteryear — arranged alphabetically.

Although many of the lost houses and castles will be familiar to any London history fan (Barnard’s Castle, Bridewell etc.), what strikes the reader is how many entries are to do with entertainment and diversion. London historically has always been a hard, grim and brutal place for most of its citizens, but through it all they insisted on being entertained: the Blitz Spirit is more than mere cliché. Fairs, circuses, theatres, coffee houses, inns, pleasure gardens, frost fairs, pubs, spas, waxworks, penny gaffs; Astley’s, the Great Globe, the Colosseum, the Pantheon, the Egyptian Hall. London today would struggle to match London of old for sheer variety.

If you were well-off, you might well go shopping at Ackerman’s, Bon Marché or Gamages (which only closed in the 1970s). But not if your job were one of these: crossing sweeper, dog finder, mudlark, pure collector, tosher and waterman — all professions of old London, now redundant, but explained here, along with street vendors and their cries, plus the secret language of the costermongers, if you tumble to my barrkin.

So Lost London succeeds completely at providing an evocative – almost nostalgic – feel for the streetscape of yesterday’s lost city. The author – for six years a cycle courier about town – galvanises this further by quoting eminent past commentators on London life, notably Horace Walpole, Walter Thornbury and Henry Mayhew. Hence we gain about a 100-year span of the contemporary view.

It occurs on reading this book that the 1850s would be a great decade for a time-travel tourist in London, for most of the places mentioned here would have still been in situ. But here we are, stuck a century and a half later; they are all gone, and we mourn them.

Lost London, An A-Z Of Forgotten Landmarks And Lost Traditions by Richard Guard (192 pp) is published on 3 May from Michael O' Mara Books. Cover price is £9.99, although it is available for less. Buy here.