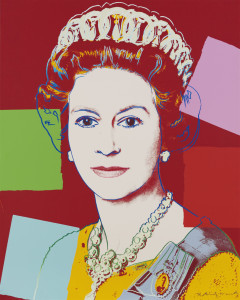 As The London Original Print Fair 2012 comes to the Royal Academy for four days later this month, make sure you’ve got Thursday 19 April pencilled in your diary. Preferably circled in red. The Opening night kicks off with Sir Peter Blake, who celebrates his 80th birthday and many decades of printmaking, at the helm and ‘in conversation’ with Times’ art critic Rachel Campbell-Johnston.

This years LOPF is truly connected to the surrounding landscape of London events. Warhol's Queen and Blake's Union Jack highlight the prominence of the Diamond Jubilee, while the work of 1948 Olympic silver medallist John Copley will also be on show. In addition, prints by artists currently on show elsewhere in London, including Lucian Freud, Damien Hirst, Picasso and Grayson Perry, will also feature at the Fair in a dedicated effort to make beautiful artwork accessible to all art-loving, knowledge-thirsty collectors.