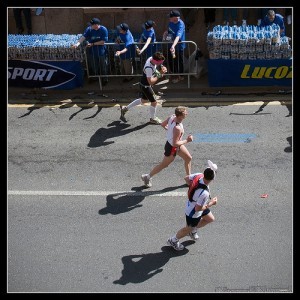 Though the brouhaha over his controversial election has yet to simmer down, Tower Hamlets mayor Lutfur Rahman is pressing on with other important borough business: his council has begun legal action against the 2012 Olympic organisers over the re-routed marathon, despite the IOC approving the westward shift last week.

The original marathon route, which took in parts of Tower Hamlets and finished in the Olympic Park, was amended in October, with the new route beginning and ending in the Mall. Organisers said that the decision was made for the sake of "minimising disruption", but many, including the borough's MPS, disagreed, saying that it was a cynical decision designed to showcase some of London's more tourist-friendly sights and keep the eyes of the world away from the insalubrious streets of the East End.

Despite the IOC confirming the route, and Lord Coe stating that their decision is final, Mr. Rahman is to seek a judicial review. There is also a petition on the council's website that supporters can sign. Yet there seems little chance that the route will be revised a third time. Lord Coe is not one for turning, and it seems likely that poor Tower Hamlets, despite being an 'official Olympic borough' and experiencing all the disruption that entails, will be left without a single event.