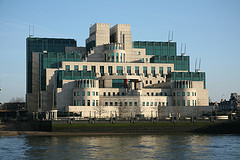 BBC News is currently reporting that a controlled explosion has taken place near the MI6 building at Vauxhall Cross. Vauxhall Bridge has been closed, while reports on Twitter suggest that people are being kept within nearby buildings for their own safety.

3pm update: It seems now that the offending object was a bicycle that had been chained to the building. A robot (photographed here by Mori Sugimoto) was sent in to destroy it. The situation has now calmed down, but don't expect much sympathy if you're the bike's owner.