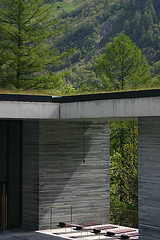 Vals Thermal Baths. Photo / p2cl
Jean Nouvel's current Serpentine pavilion hasn't even been dismantled yet — it runs until the 17th October — but it is being reported that next year's will be designed by Peter Zumthor.

The Serpentine has yet make any official announcement, and in truth it's a little early — they usually announce the architect in late winter, so treat this as nothing more than a rumour at the moment. If true, the choice of Zumthor, who won the Pritzker prize in 2009, marks a slight shift away from the publicity-courting likes of Nouvel and Frank Gehry who have worked on the project in recent years.

Perhaps best known for building an Alpine thermal spa, the Swiss architect is notoriously guarded in the commissions he accepts, rejecting many projects and only working on those that he feels personally attached to. A profile in Time magazine two years ago said that the 65-year old "is to architecture what Samuel Beckett is to literature...[drawing] maximum impact from a bare minimum of means". His ascetic, sculptural approach should result in something quite unique next summer.

Zumthor's practice is currently at work on the Secular Retreat, a project in Devon for Living Architecture, which goes slightly against Pavilion rules which state that the architect should not have previously built in England. Given the likelihood of having Zumthor actually build something permanent in London, design folk probably won't be too bothered by the rule-bending.