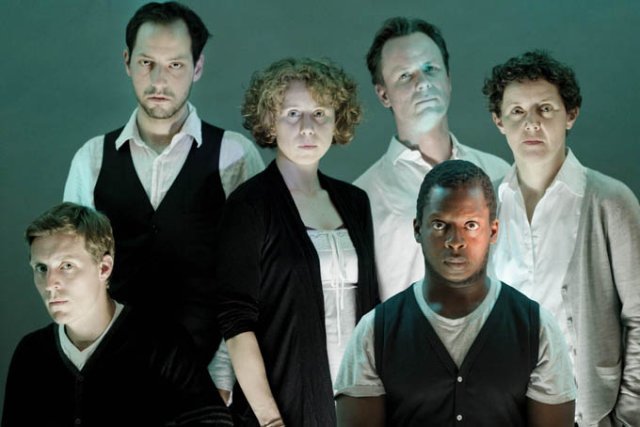 The audience entering the Arcola auditorium immediately become participants, walking on bare soil on the way to their seats. The austere set for Light Shining in Buckinghamshire features a cruciform ditch, dug through the concrete to the cold earth beneath. Both set and play strip away the surface to reveal the soil of England at the heart of the play, which revolves around the question of liberty, birthright and access to the land.

Caryl Churchill’s remarkable play is set during England’s Civil War, around the 1647 Putney Debates when an egalitarian state briefly seemed within the grasp of the New Model Army and its radical agitators. Churchill takes a scalpel to the English body politic exposing how, 350 years on, we’ve failed to address fundamental questions of individual freedom.

The two acts each culminate in a crucial debate. At Putney, Cromwell and General Ireton face down the Levellers, preferring land rights to equal rights for all. Off stage, Leveller leaders are executed at Ware, and the dream is snuffed out. The second debate is very different. This time there are no gentry present, just a group of starving Ranters debating Christ’s imminent, glorious return and their release from bondage. In the ashes of revolution Churchill finds a cinder still burning, a new spiritual freedom that comes from within.

Around these set pieces a swirl of characters depicts the state of the nation, and the hierarchy of entitlement that keeps everyone in their place. We see brutal poverty, starvation, abandoned children and men desperate for change. We see women excluded from the new Jerusalem. We see the new bosses, same as the old bosses, sentencing a beggar woman to be whipped 50 miles back home.

Churchill’s clear 16th century language is full of glowing images, such as a table overturned, spilling “capons, confit and claret”. The play’s challenging structure is delivered with complete confidence by a tight ensemble who each playing many characters: Michelle Terry, stonewalling as the patrician General Ireton; Helena Lymbrey overwhelmed with guilt at killing her child; Christopher Harper as a man at prayer, struggling with hatred for his father; Kobna Holdbrook-Smith as an angry butcher, refusing meat to the rich.

This production is a real achievement. Polly Findlay’s direction provides exceptional clarity, enhanced by Hannah Clark’s stark designs. The only colour seen on stage comes from the red-labelled bottles of London Pride on the Ranters’ table in the final scene. The red is a symbol of hope, an inner fire that will outlast the powerbrokers. This essential production of a neglected classic should bring audiences flocking to the Arcola.

Light Shining in Buckinghamshire is at the Arcola Theatre until 7 August, tickets £16