'Tache Up For Charlie Chaplin Day Of Democracy 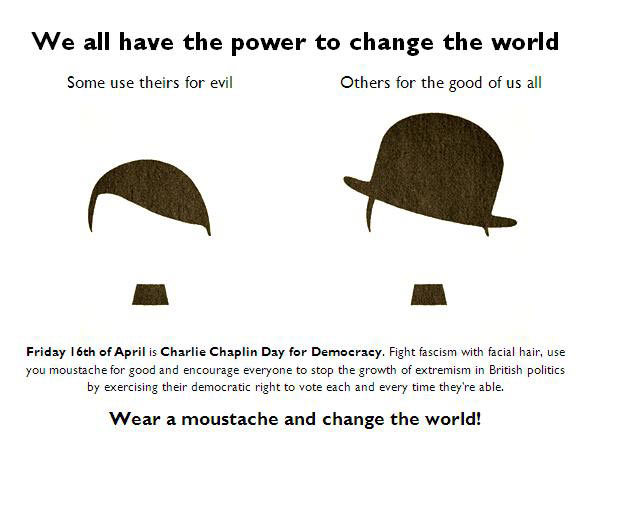 Lambeth's local boy done good would have been celebrating his 121st birthday tomorrow. Famous as a filmstar, he also pioneered a certain arrangement of facial hair. Some argue that Hitler did it first but Chaplin surely gets the credit as he had a rationale behind it, "I added a small moustache, which I reasoned, would add age without hiding my expression." It also enabled him to satirise Nazism.

Richard Herring's excellent UK tour of 'Hitler Moustache' reclaiming the toothbrush moustache for comedy and picking apart bigotry is nearing its conclusion which chimes neatly with Mr Chaplin's birthdate. Tomorrow is thus declared the inaugural 'Charlie Chaplin Day for Democracy' and you are urged to show support for this by joining Mr Herring in a spot of 'tache solidarity. It's explained rather well and thoughtfully here.

You don't have to go to Herring's lengths and grow or shave yourself a toothbrush tache. Drawing one on and photographing it will please him and us greatly. If you picked one up out his bucket on tour, affix it firmly. As he says:

I am hoping that some of you might join me and wear a real or false toothbrush moustache for the day (or at least part of it) in order to remind people of the importance of our vote and to help fight fascism and the BNP... Even if that was only by drawing a moustache on a poster or putting one on a statue or whatever you think would help (don't cause damage to anything of any actual value of course). After all these months of being almost the only idiot with this ludicrous face furniture, it would be good to know that a handful of other fools had joined me.

Find out more at www.richardherring.com (scroll to the end of his blogpost).