Wee Birdy is a Sydney chick who's made her home in London, spending her time seeking out treats and secret gems in London's indie shops - with a fair share of cafes and markets too. Essentially all that is lovely about London - just in time for Christmas shopping! 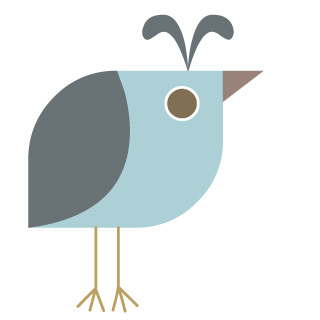 Describe your blog in less than 15 words.

Lots of reasons, but mainly because I had just moved to London and wanted to document all the shiny new things I loved about my new hometown. I was convinced I was bleating on about stuff that most Londoners already knew about, so it was really like a postcard home to my family and friends back in Australia. I was a magazine editor back in Sydney, so it was also kind of my ‘edit’ of London (and other stuff I was stumbling across online, like Etsy). I’ve always loved London and spent most of my twenties wanting to live here, so when I finally made the big move I needed some kind of outlet for all the excitement, as corny as that sounds. But I do tend to get excited about things - and I think the whole ‘editing’ aspect is entirely relevant as well.

Where to start  Flowerboxes, sugar mice, picking over 400-year old clay pipes on the banks of the Thames, the incredible galleries and museums, Time Out magazine (who, in the interests of full disclosure, are my lovely employers), Saturday mornings at Broadway Market, dusty old bookshops, sitting in the bar at the Tate Modern watching the sun go down over the city, wandering around the tea aisle at Fortnum & Mason, people-watching at Princi, robins in the snow, getting lost again in Soho, Erdem, Selfridges’ Christmas windows, geese and squirrels in St James’s Park, the coots on Regent’s Canal, springtime blossoms, Pepys’ diaries, carboot sales, Charbonnel et Walker pink champagne chocolates, Cheshire Street, Dover Street Market, old-fashioned men’s grooming shops in St James, The British Museum, conkers in autumn, petals in spring, London fashion designers, Rob Ryan, Tatty Devine, Ezra Street at Christmas, clutching a bunch of bargain peonies from Columbia Road flower markets, afternoon tea at the Dorchester, raclette at Borough Market, and about a million other things I’m yet to find the time to blog about.

What's your favourite find so far, and is there anything you're still hunting for?

Impossible to name just one, but I fell hard when I first discovered Rob Ryan’s work - and it was pretty cool to finally poke around Tatty Devine’s Brick Lane boutique after admiring their work from afar in Australia. I have some bits of Elizabethan clay pipe I quite like, too.

It pains me to say that I’m still hunting for good customer service at Liberty (which is sad, because it’s one of my most favourite shopping destinations in London).

What would you advise people to do to snap up the gems in London that you do?

Be curious and take a wrong turn; read Time Out mag for sample sale alerts; don’t get sniffy about ‘touristy’ stuff: for instance, the wonderful Pollock’s Toy Shop is right in the heart of tourist-central Covent Garden.

What's good and bad about shopping in London?

I think so. Wee Birdy has not only connected me to my London readers, but it’s meant that I’m constantly on the look-out for things my readers might like.

I’m constantly amazed by (and eternally grateful for) the ongoing support from fellow bloggers - not only in London, but around the world. I’ve started up new friendships with people both in my hometown of Sydney as well as London and beyond.

Ohhh, there are so many great London bloggers but I really rate Mrs Trefusis Takes a Taxi (glorious musings), Kate Wilson of Little Doodles (gorgeous bird illustrations) and India Knight’s new Posterous blog (wonderful finds - it’s like an ongoing extension of her book, The Shops). And of course I follow all of Time Out’s blogs, particularly the food blog.

And for some general London chat - where do you live and why do you love it?

I live in South-East London, and I love being close to Greenwich park, Borough Market and Rhodes Bakery. I don’t love getting mugged.

The British Museum. No, the V&A. Wait St James’s Park. But then there’s Borough Market. And Hampstead Heath. Too hard! But I do have a soft spot for the old-fashioned simplicity of a sandwich and a cup of tea at Paul Rothe and Son. And I’ll never get sick of the sight of F.Cooke’s pie and mash shop on Broadway Market.

Almost. I once spent a good ten minutes on the Central Line hanging on to that tiny window pane at the end of the carriage trying to inhale the five inches of available hot, fetid air. It helped. A bit.