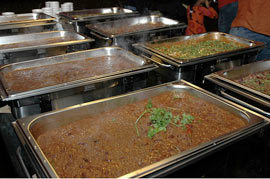 By Tiki Chris
Sceptical about the predictions for this week's heatwave? If you're looking for a place where the temperature is guaranteed to rise, then look no further than the All Star Lanes Chilli Cook Off this Thursday. Part of their American Independence day celebrations (yes, it really is that time of year again), the cook off sees the UK's most hard-core chilli-heads vying against one another for the title of 'All Star Lanes Chilli Champ 2009'. If that isn't enough, the winning chilli will also find fame with a temporary place on the lunch time menu of their American-style diner. It's not just about who has the most potent chillis, however, but aroma, taste, consistency and meat quality will also be judged by a panel of top London food writers and chefs, including Simon Davis, William Sitwell and Hereford Road's Tom Pemberton.

Fortunately for those nervous as to whether or not their cooking would stand up to public scrutiny, the contest is no longer accepting entries, but why not go down and pretend to be a food critic for the day? London foodies are invited to sample the contest entries and vote for their own favourite, which will then be given the 'People's Choice Award'. Doors open to the public at 12pm and the professional judging begins at 12.30pm, with public sampling from 1.30pm.

So if you know your jalapenos from your scotch bonnets, your kidney beans from your, well, any other form of bean, then head down to All Star Lanes this Thursday and show those yanks that Britain really can handle the heat.