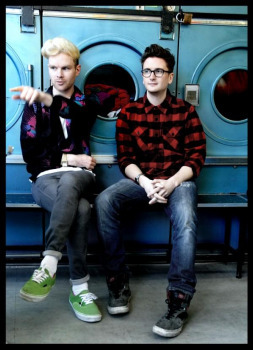 Cruising through myspace we stumbled across Dansette Junior, two boys from North London armed with synths and a cross between Damon Albarn and Calvin Harris style vocals (seriously). 'Drums and Bass' is our favourite song complete with hypnotic comedy lyrics about driving home to Kentish Town. We caught up with the Hoxton haired boys for a quickie...

Hello Dansette Junior. Who are you and what are you upto?

Hiya, Dansette Junior are 2/3/4 mates from Kentish Town. We get together and make noises that we cant ever seem to find again by mixing analogue synths with computer geekery.

What's the name all about?

I, Will, used to go into my dad’s studio when he was in bed and listen to all his old records on his record player, which was made by Dansette. A Junior was just one model they bought out.

Whereabouts in London are you based? What's brilliant and what's totally horrible about it?

We are all in Kentish Town. Its brill because its like one big episode of Cheers, where everyone knows your name. Theres nothing horrible about it and we will take on anyone who’s got a bad word to say.

Where are you from originally, what does London do better?

I can’t speak for us all but I'm originally from Bromsgrove near Worcester, which is a bit of a one-horse town. What doesn’t London do better? I’ll take you there seriously, its shit.

So what's the latest news with the band?

We are 9 songs into the album and we are just moulding the live performance. Think were gonna get Lawson on decks as well as percussion. A bit of a live mash-up if you will.

Give us your most awesome reason for why we should check you out rather than every other new band out here?

We really think we are bringing something new to the table. Were trying to fuse the analogue, harmony, string sounds of the 60’s/70’s and bring it up to date with and edgy electro mix.

I love Shunt nightclub in London Bridge, cant believe its closing! You never know what’s going to happen once your inside. One room might be live drawing; another might be an accordion band, a rave in another, its just mad.

I would like to do a gig on top of Battersea Power Station,the view must be incredible. Not sure about the sound thou.

Yes, on Portobello Road on a Sunday afternoon one summer. It was so much fun. People were dancing in the street there were kids running around, I even made my BFH.

What's your favourite clubnight in town?

It's got to be Monday Night Youth Club held once a month at Proud galleries in Camden. They have wicked bands from all over the world on playing in Stables and the drinks are £2!The crowd are really friendly too.

Dansette Junior play the Proud Galleries on May 25.