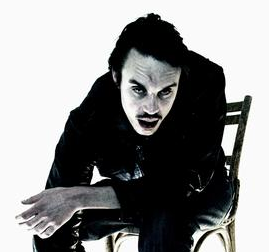 You'll remember Kleerup from his heart-tugging collaboration with Robyn 'With Every Heartbeat'. That song came from his debut solo album which was released in his home country of Sweden last year and packed to the brink with songs to make you dance while gently sobbing. The video for the first UK single 'Longing For Lullibies' is traumatic enough. If you're feeling strong of heart, you can experience that concerning feeling first hand as the hairy synth guru takes a trip back to the UK to play his first solo gig right here in London.

Cargo is the venue and the hosts are Wonky Pop, who'll be putting on a whole host of 'credible yet kooky' pop acts. We might have once though this was a good idea, but now it's beginning to seriously grate. If you like pop music, be proud. Don't try and give it another name to make yourself look cool! Also on the bill is the hotly tipped Dan Black, new bleepsters Crystal Fighters and Dimbleby & Capper as well as more to be added.

Tickets are on sale now priced at £8 or we've got a pair to give away! Leave your details below and we'll let you know if you're a winner on Friday.