Quite a treat this week, as we get the lowdown on the unique life of a London pigeon. The infamous Brian of Pigeon Blog fills us in on everything from why London rocks, what's up with the squirrels and what happens when the pigeons party in Piccadilly Circus. 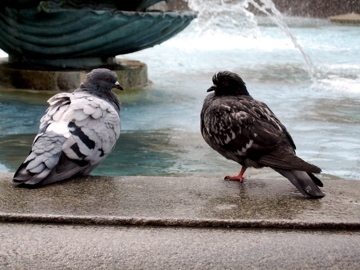 Brian (left) and Johnny One Leg hanging out by the fountain in Trafalgar Square.

Pigeon Blog is the online diary of a London pigeon. Simple as.

How and why did you start blogging?

I started the whole thing as a bit of a laugh really. Just the day-to-day doings of a London pigeon. Never thought it would catch on. To be honest, I wasn't sure anyone was going to be that interested in a pigeon's point of view. Just goes to show. Jesus. Last year I even got into the Time Out Top 50 London websites, and all I do is go on about stuff we pigeons get up to. Amazing, really. As for how, that's a whole other story. I first got to grips with the Internet a few years back, which is no mean feat for a pigeon let me tell you. Tricky stuff. I'm loads faster now than I was though, which is good. Getting a single post done used to take me several hours of seriously strenuous beak to toe maneuvers. Now I can bang one out in ten minutes if I want to.

Everything. London rocks as Cities go. Much better than Milton Keynes. Is that a city? I love the parks, the bits of them without the squirrels that is. Then there's the architecture, even better from the air. I think what I love most though is the variety of ledges. Beats everywhere I've ever been for ledges. Short, long, high, low, sheltered, not sheltered. The works. Something for every pigeon. I did a feature on Pigeon Blog about it. A series of posts called London's best ledges, originally intended as a bit of a guide for the visiting pigeon. Empty though it is, Trafalgar Square is still a main hang out for the London pigeon. Nothing like it was back in the day, which is a shame. Saying that, not too keen on the place at weekends. Way too many out of towners for my liking. Generally, apart from the banning of free seed handouts and the occasional hawk, I’d say we pigeons got it pretty good here.

What would be your dream day/event in London to post about?

My dream event, and I think I speak for all London pigeons when I say this, would be our very own National Pigeon day. They did it in New York last year. Unfortunately, it was largely attended by freaks, which meant the NY pigeons were forced to give it a wide berth. Wouldn't be like that here. I'm thinking some kind of outdoor event, maybe in Trafalgar Square for old time's sake? I'm thinking free seed, maybe some foam? I'm thinking a kick arse party. A musical extravaganza. Shift focus from the do-gooder war hero pigeons like Cher Ami, not that Cher doesn't deserve a shout out; dedicate it to the urbans instead. The real heroes. We deserve it. Just for one day, let us bring a little of that pigeon magic back to the Square. Will Young could host it. Sure he’d be up for it. Maybe have The Pigeon Detectives do a set, or The Kooks?

What's the deal with you and the squirrels?

There's been a deal between pigeons and squirrels for longer than I know, and that's quite a while. There used to be an agreement in place - squirrels stick to parks, pigeons get the streets, but then it all changed. Squirrels got bored of the grass, and started moving in on the concrete. Seriously taking over, throwing their weight around the rooftops. Well out of order. Recently though, it got a whole lot worse. Ever since they started learning the Kung Fu moves, they've been a freakin' nightmare giving it large all over London. We're coming back at 'em though, throwing together a few nifty moves, like flying away. Works every time. Came up with something else recently too. Words. Generally, squirrels are poorly educated and don't really do words, so I reckon we can beat them with the lingo any day. Crush them with wit. Mash ‘em up with our verbal dexterity. So far, so good. 'Operation Stop The Squirrel', granted not the most imaginative of names, is most definitely underway. What do you wish for the pigeons of London? What would you change for them? Free seed on every corner and the positive encouragement of pigeon feeding, obviously. Maybe even offer some sort of incentive? How about a cash discount on bread if you share it with a pigeon? Oh, and some mini versions of those outdoor heater things on rooftops. That would work. Maybe a few smaller ones for the ledges? The removal of bins on certain streets like Brick Lane. Anywhere with a high concentration of throwaway food joints. I'd also remove all squirrels. Stick the whole lot on an island somewhere off the West coast of Scotland. The other thing I'd do is get rid of the anti-pigeon spikes. Totally sucks if you accidentally park the arse on one of those, and I speak from experience. Jesus. Didn't fly right for weeks.

Blimey. No idea. That's a tough one. I guess some of my favorites are where people send me stuff. Had a great one the other day - some dude had his Pigeon Blog bag searched at the gate of a cricket match he went to in India. Kid you not. Then, and this is the best bit, the whole affair only goes and gets on Sky Sports News. Hilarious. He sent me a pic and everything. Some togged up official rummaging around in a bright yellow Pigeon Blog bag. Classic. Some of my recent coverage of 'Operation Stop The Squirrel' seems to have caused a bit of a stir in the nation's loins too, which is always good.

Would you feel more or less connected to London, would you have missed out on things without your blog?

Absolutely. Seeing as getting to the heart of a London pigeon's world is what Pigeon Blog is all about, Pigeons everywhere want me to get involved in what they’re up to just so I can write about it. Frankly, if it wasn't for the invites, I'd probably have given up ages ago. Kidding. But it's not just the hard partying, having the blog also means I get to do stuff for the London pigeon community, real stuff like my Give Pigeons A Chance campaign a couple of years back. Ended up with over 400 signatures on an online petition. Shed loads better than I could have got with a clipboard any day. Small and brief though it was, I like to think I made a difference. I'm up for doing more of it too. Getting going on a National Pigeon day would be a good start. Up the profile of the pigeon Change people's perception. The rats with wings thing is such a misnomer. Pisses us right off.

What do pigeons get to see, or know about London that others don’t?

For a start, we get to see it from the air on a regular basis, which is great on a clear day, but not so good when it's foggy. Getting sky bound means that we never have to worry about the cock up that is Transport for London either. Take the other day when it snowed. Apart from risking the loss of toes to gangrene, none of it really bothered us pigeons. Sub zero temperatures aside, getting around was piece of piss. The rest of London though. Jesus. Totally fell apart. Massive chaos. For the first time in a while I actually saw the look of envy in some bloke's eyes as I flew over just as he landed on his arse. There's also the obvious stuff like where the best ledges are and, really important at this time of year, which rooftops have the poorest insulation.

My fave blogger in London has got to be the mighty Annie Mole of Going Underground. She rocks, especially when it comes to giving advice on which tube stations are pigeon friendly, sadly not many these days. Another one I like, but mainly coz it's a useful source of information on derelict buildings in London, is Derelict London. Then there's Unreliable Witness. Andre Jordan cracks me up.

And for some general London chat Where do you live and why do you love it?

I live in Soho, on Beak Street, right above Bistro 1. Apart from being well central, it's also close to Piccadilly Circus, which is one of my favourite spots in London. Soho Square's a great place to hang too, especially in the summer. Bread bits everywhere. Heaven for the pigeon.

I'd have to say Piccadilly Circus. There's this game we pigeons play called The Eye Game. You fly right up to the video wall, stare at it, close as you can, look deep into the red. Totally spins the head out. It's the quickest way to get off your nut there is, and I'm a sucker for it. I reckon every pigeon in London has had a go at it at least once.

Sadly, yes. It was after a go at The Eye Game one Saturday afternoon. I had to visit some pals in Chiswick after, flew as far as Hammersmith, decided I was too fucked to fly any more, so I got the tube. Big mistake. Threw up at Ravenscourt Park. Not good, and well embarrassing. Mart was with me at the time. He pissed himself laughing. I didn't. Gave the tube a miss for quite a while after that!