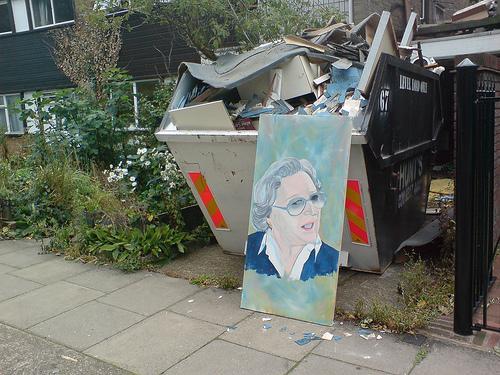 There's something for all of us this week: the amateur mystics, the bargain hunters, the sweet tooths, the self-actualisers and the voyeurs. Which might make it sound like any other week in our city, and it is— but only if you know where to look.

Friday: The hottest ticket this Friday night is, of course, Londonist's fourth birthday. There are probably other things happening around the city tonight but they probably don't involve free cake. They're rubbish.Saturday: If you're already burned out on the blockbusters at the London Film Festival, and even the indies are just too mainstream for your rarefied tastes, join in the international Home Movie Day at the Curzon Soho and conspicuously eschew the film biz in favour of ephemeral gems. Today is free and will even include an Italian holiday film by David Lean.Sunday: Free art exhibitions are everywhere, but the art itself is usually expensive. Not so in the alternate universe of the Free Art Fair, where you can line up well before 6pm on this final day and politely ask for a piece off the wall. Your best bet is to visit at least once between now and then, both to stake out your prize, and because it's an exciting group show of some fairly big names in its own right.Monday: The LSE is opening its New Academic Building at Lincoln's Inn Fields with a big evening lecture series called Space for Thought. Tonight's is Gut Feelings: short cuts to better decision making, which sounds like the worst sort of motivational drivel, but when the speaker is Dr. Gerd Gigerenzer, director of the Centre for Adaptive Behaviour and Cognition at the Max Planck Institute, we think it's worth listening up.

Tuesday: Not to be outdone on public offerings, the School of Oriental and African Studies brings on a highlight of the year's Brunei Gallery free concert series. This Guitar Special Double Bill brings together Cameroon's Muntu Valdo and Cuba's Ahmed Dickinson for a night of eclectic virtuosity. Expect to hear sounds the likes of which you never though a guitar could make.

Wednesday: If, like us, you still don't quite understand what's up with the patch of weirdness on the backstreets of Southwark that is the Cross Bones Graveyard, get a primer tonight from John Constable himself (no, not that John Constable) at the Moot With No Name on the Strand. £2. Just in time to catch up for the annual, theatrical Halloween Cross Bones rituals.Thursday: High Treason is screening in Trafalgar Square tonight, and we can't wait. Gather with other incorrigible nerds to see 1950s London as it only ever was in the retro-futurist minds of 1929. This bit of double time travel will be given the full treatment with live piano accompaniment, and should have the square ringing with more laughter than the film was ever intended to inspire.Or, you could stay in and bake your own cake.

Check out London is Free for more ideas of things to do for nowt. Check the websites for more information.