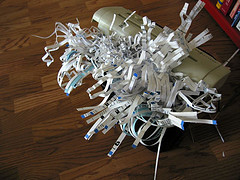 Tooting has just been bestowed with a rather dubious title — the UK's worst place for ID fraud. It's not just a little more likely that your identity, credit and good name will be stolen from SW17, it's a whole five times more likely than the UK average.

West Ewell, Wimbledon and Battersea are just behind Tooting when it comes to risk, and London as a whole is about twice as bad as the rest of the country.

So why the massive rates of ID theft, which have increased 66% over the past year? Experian, who commissioned the report, are blaming organised crime.

And just to scare you bit more, they say living in a building with shared mailboxes, renting and moving frequently are also factors that can help thieves steal your info. Gulp. No wonder us flat-living Londoners fare so poorly.

Guess it's time to invest in that shredder...