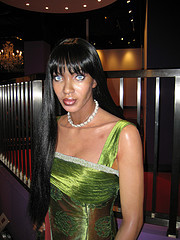 Everyone's favourite and fabulous phone-throwing supermodel, Naomi Campbell, was "bitterly disappointed" to lean that she'll be called to court June 20 and charged with assaulting two police officers in T5.

The supermodel learned of her charges his morning at the Heathrow police station, which include three counts of assaulting a constable, one count of disorderly conduct and two counts of threatening the cabin crew on her flight.

She could potentially be facing six months in prison and fines of up to £9,500 if found guilty on all counts.

Now we know traveling from T5 is enough to make anyone's blood boil, so maybe the judge will be sympathetic and let her off easy. Or maybe she'll be held up as an example to remind us all that we need to be polite when we travel, even in the face of baggage mishaps and mixed up new airline terminals. Team Nice, your thoughts?

Photo of a wax Naomi Campbell from Madame Tussauds in Hong Kong courtesy of dreistreifen's Flickrstream under a Creative Commons license.