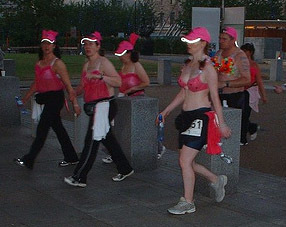 If you noticed something funny around town on Saturday night, namely about 15,000 people wearing bras in place of tops or over tops, and didn't know what was going on — mystery solved! The 11th annual Playtex MoonWalk breast cancer event was taking place.

Starting from Hyde Park, the mostly female group, which included eight MPs, went on a 26-mile walking tour past sights like the London Eye and Tower Bridge wearing bras in a "Bollywood meets Rock" theme. The walk was expected to raise a strong £6 million.

If you're still scratching your head about how to turn a bra into a Bollywood meets Rock hybrid outerwear garment, apparently it involves sequins, sashes, frills and whatever else you can throw on your brassiere. Better yet, Playtex has a rather hilarious but handy customising guide!

What's next year's theme? We want to pull out our bedazzler and hot glue gun and get started!

Photo from a previous MoonWalk from meke's Flickrstream.