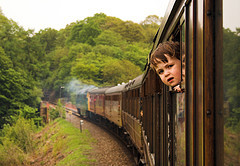 Rail travel has lost some of its romantic appeal over the years, but there's a new train route on its way that's setting rail enthusiasts' hearts aflutter — a 23-day, 7,000-mile trek that'll connect

Though the prospect of spending 23 days in a little train compartment is enough to make anyone but the most seasoned rail traveler feel a bit claustrophobic, if you've got the time to spare, the fortitude to make the journey and the desire to apply for a slew of travelers' visas, you can go on what's being called "the world's greatest railway journey."

When the route is complete, it'll take you from London through Brussels, Cologne, Vienna, Bucharest, Istanbul, Tehran, Quetta, Lahore, Amritsar, Delhi and Calcutta before ending up in Dhaka, Bangladesh's capital. The journey will be more than 1,000 miles longer than a ride on the Trans-Siberian railway.

All that's needed now to complete the route is linking Pakistan and Iran's lines — consequently the one place where there are some security concerns — but that should be done in a few months. There are also plans for a tunnel under the Bosporus, though until that's completed, travelers have to use a ferry to make the leap from Europe to Asia.

No word yet on how much riding the full route will cost, but it may be set to become the new gap-year must. It also looks like if the political situation in Burma ever settles down, Londoners will be able to train it all the way to China, Singapore and the furthest reaches of Asia.