It's Official - Boris Will Be In The Blue Corner 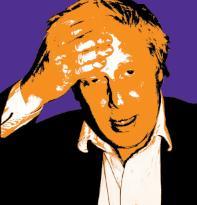 The poll was open to Londoners of all political colours, sadly the poll wasn't highjacked by thousands of Warwick Lightfoot's magical woodland friends from the Shire. In fact, only 0.37% of eligible voters took part. Hooray for democracy.

The results were as follows -

Poor Warwick Lightfoot, he certainly had our backing after being the first politician to admit to us that he had vomited on the tube.