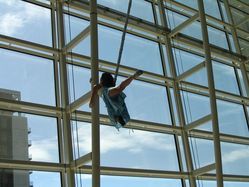 We, at Londonist, love all things artsy that try different things in unusual places. We also really love free things hence we’re collectively hopping up and down with excitement at the prospect of this year’s Greenwich & Docklands International Festival which kicks off four amazing days of free arts festivalness this week. We went last year. It was great.

Friday night at the Old Royal Naval College, Greenwich SE10 will be in “K@osmos” as gravity defying aerialists and bungee performers crawl over a cosmos sphere suspended from a crane.

If that hasn’t totally knackered you out, get yourself down to Roman Road, E3 for 9.36pm and see the camels.

Sunday brings your excuse to check out shiny new Peninsula Square and visit O2 for "Out Of The Blue" – "a massive array of UK and international street artists in spaces so huge they could be outside!" Highlights include Strange Fruit returning with their sway poles and Wired Aerial Theatre bringing back their incredibly graceful bungee choreography. Watch out also for whirling dervishes and a helium filled zeppelin.

Back at the Naval College in Greenwich, the festival will close with a reflective performance of “Mass Carib” by Nitro company to mark the 200th anniversary of the abolition of the transatlantic slave trade.

The GDIF website is a bit broken at time of writing but download the full festival programme here. It seems churlish to miss such an awesome array of free stuff. GIDF runs from Thursday 21 - Sunday 24 June.

Image author's own of Wired Aerial Theatre in the East Winter Garden GIDF 2006.