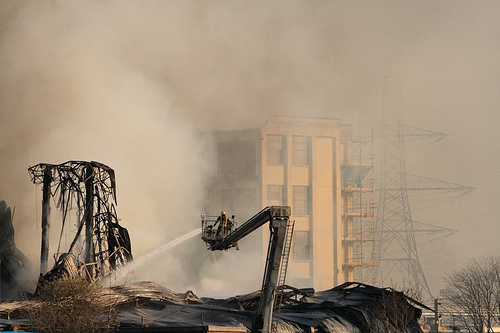 Oxford Street remains closed to traffic today due to a rampant fire which broke out above the New Look store on Oxford Street during rush hour yesterday evening.

Ten fire engines and around fifty firefighters remained at the scene this morning – at one point an incredible 150 firefighters were deployed through the night to battle the blaze, bring it under control and stop it spreading to neighbouring buildings, including the huge Marks & Spencer’s.

True to the spirit of hardcore Oxford Street shopping, however, and perhaps as a tribute to the smouldering retailer, eyewitnesses reported that “most people just carried on shopping." Jolly good.

Four of the five floors were damaged by the fire, including the ground floor store, and the Fire Brigade say that the front of the building is currently unsafe. It is thought the fire broke out in one of the flats above the popular women’s clothing store but gags about New Look’s penchant for cheap, flammable material and disposable clothing ranges should probably be avoided at this stage.

The area is cordoned off whilst the fire crews make the area safe and investigate the cause of the blaze. Oxford Circus and Tottenham Court Road tubes are open as usual.